Saka Nakodar: Memorial Seminar Organised in California in the Memory of Sikh Martyrs

California: The Sikh sangat of California on Saturday 4th February 2017 organised a  memorial conference at two different place in the memory of the of 4 Sikhs martyred by the Punjab Police at Nakodar city in Jalandhar district while protesting against the beadbi of Shri Guru Granth Sahib on 4th February 1986.

The detailed report pertaining to the conference reads as follows.

In the city of Milpitas and Fremont  two different events were organized to commemorate the 31st anniversary of Saka Nakodar martyrs. Sikh Sangat participated in mass numbers to pay their respect to the martyrs. The martyr families were honored in recognition of the  Shaheed GurSikhs supreme sacrifice to uphold the sanctity of Shri Guru Granth Sahib at Nakodar city on February 4th 1986.

In regards to celebration of the 31st anniversary of Saka Nakodar martyrs, American Gurdwara Parbandhik Committee (AGPC) organized a seminar “Beadbi of Shri Guru Granth Sahib and Sikh response” on February 4th 2017 at Gurdwara Singh Sabha Milpitas, California.  In this seminar Dr. Harinder Singh from Stanford University gave detailed facts with proofs about the Sikh response in regards to Shri Guru Granth Sahib desecration in the city of Nakodar on February 4th 1986. 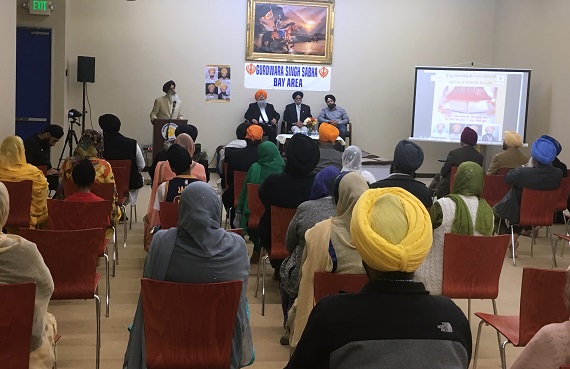 Dr. Harinder Singh presented the post mortem reports of martyrs: Bhai Harminder Singh Chaluper and  Bhai Baldhir Singh Fauji; their names, their father names and their addresses are clearly filled by the doctors/police on these post mortem reports.  International Human Rights Organization (IHRO) report was also presented and as per this report Sub Divisional Magistrate (SDM) stated that three Martyr Gursikhs were identified on the evening of February 4th 1986.  The IHRO report also states that Harminder Singh Chaluper was shot in a point blank range with a service revolver by a police inspector named Jaskirat  Chahal, while Harminder Singh was in the police custody.

It is pertinent to note that these GurSikhs were cremated by the police as unidentified and unclaimed.  Dr. Harinder Singh exposed police’s lie that they were unidentified by tabling the post mortem reports.   Bapu Baldev Singh father of Martyr Bhai Ravinder Singh Littran was in the Nakodar Civil Hospital on February 5th 1986 and had identified his son’s body .  Bapu Baldev Singh claimed to get the body for the last rites, but the police authorities denied.  It is clear that the police intentionally declared them unidentified and unclaimed, because they did not want to give the dead bodies to the families.  The post mortem reports presented by Dr. Singh state that three GurSikhs were shot in their chests and one was shot in the mouth.  Bhai Jhilman Singh’s picture shows his blood-drenched shirt.

The second speaker of this seminar Dr. Amarjit Singh clarified about the desecration of Shri Guru Granth Sahib from 1986 to present.  Dr. Singh also elaborated on the importance of Saka Nakodar in the  Sikh History.   Dr. Singh stated that after the Sakas of 1984, this was the first Saka where the Sikhs have made a supreme sacrifice in the honor of Shri Guru Granth Sahib.   He also condemned Shiromni Gurdwara Parbandhik Committee (SGPC) for not installing the portraits of Saka Nakodar martyrs.  The congregation, AGPC, Gurdwara Singh Sabha Committee and the speakers strongly asked the SGPC to fulfill their duty and give these Martyrs their overdue regard by installing their portraits at Central Sikh Museum Shri Amritsar. Mata Baldip Kaur and Bapu Baldev Singh, parents of Bhai Ravinder Singh Littran were honoured by the AGPC, Gurdwara Singh Sabha Committee and Sikh Sangat.

The second event was organized at Gurdwara Sahib Fremont, where the speakers informed the congregation about the martyrs lives, families struggle and the present condition of Sikhs.  Giani Gurbhej Singh explained the concept of the Shahadat.  Dr. Amarjit Singh who specially came from Washington DC to attend this event elaborated the Sikh struggle from 1986 Saka Nakodar to present.  Mr. Davinder Singh coordinated the stage.  The Gurdwara Parbandhik Committee installed the pictures of Saka Nakodar martyrs in the Gurdwara langar hall.  The martyr families were honored by The Sikh Sangats, Dr. Amarjit Singh Director Khalistan Affairs Center and  Gurdwara Parbandhik Committee.  The Sangats paid their respects to the Martyr GurSikhs and showed complete solidarity with the martyr families.