Amritsar: Members of the Sant Samaj yesterday (Dec. 22) met Akal Takht Jathedar Giani Gurbachan Singh and handed him over a memorandum, seeking revocation of Sikh calendar called Nankshahi Calendar. Members of Sant Samaj also demanded the implementation of the Hindu calendar called ‘Bikrami Calendar’. They demanded that the confusion caused by the ‘amended version’ Nanakshahi Calendar should be ended. It must be noted here that the Nanakshahi calendar was implemented in 2003.

It was accepted by Sikhs across the world except the Sant Samaj. Sant Samaj leaders in 2009-10 had allied with Punjab’s ruling party, Shriomani Akali Dal (Badal), to put their ‘political weight’ (votes) behind the SAD (B) and in return to it SAD (B) facilitated an amendment in Nanakshahi Calendar in 2010 on demand of Sant Samaj. This amendment remains a source of confusion in the Sikh calendar. 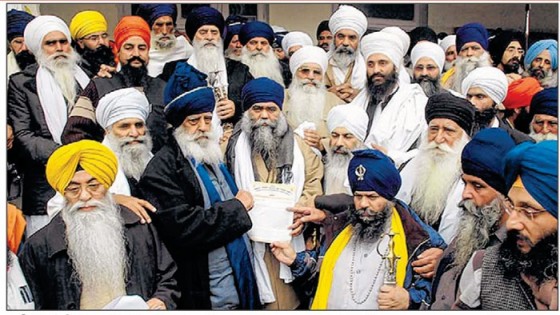 It is notable that the Hindutva forces were also opposing implementation of Nanakshahi Calendar taking it as a threat to their agenda aimed at securing assimilation of Sikhs into Hindutva fold.

Sant Samaj leaders led by Damdami Taksal chief Baba Harnam Singh Dhumma, claimed that the amended Nanakshahi Calendar had led to chaos and created a divide among the community.

Baba Harnam Singh Dhumma and other Sants said though amendments were made to the Nanakshahi Calendar in 2009 by changing the dates of ‘Gurpurbs’, the amended version too caused confusion among the Sikhs.

The leaders claimed that there was no such predicament in the Bikrami Calendar which the Sikh community used to follow before 2003.

After receiving the memorandum, the Akal Takht Jathedar said he had been receiving letters from both the sides – those supporting the original Nanakshahi Calendar and the ones supporting the Bikrami Calendar. He said they would take a final decision after deliberating on the issue in the meeting of the Sikh clergy. Replying to a query, he said most of the letters he received were in support of the Bikrami Calendar.

Media reports say that the ruling Shiromani Akali Dal (Badal), an ally of Hindutva forces, intends to implement the Bikrami Calendar for which it has also initiated a process to build the consensus. The meeting of the Sant Samaj with the Akal Takht Jathedar is also being seen as a part of this process.