New Delhi: As per the media reports the Supreme Court of India (SCI) while refusing to grant an interim stay on its March 20th order maintained that it had not read down the provisions of the  Scheduled Caste and Scheduled Tribes (Prevention of Atrocities) Act but had only sought to protect innocent people from arrest under this act. 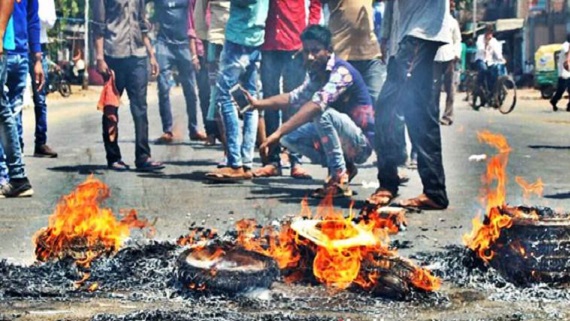 SC/ST Act: In the wake of Dalit organisations’ call for a nationwide strike (Bharat bandh) in protest against the alleged dilution of SC/ST Atrocities Act, the government has moved a review petition in the Supreme Court Of India on Monday. (Express Photo)

On the violence that has gripped several states on Monday, the court said that the people protesting may not have read its order or may have been misled.

Appearing on the behalf of Central government Attorney General (AG) K K Venugopal pleaded for a stay on the SCI’s directions to law enforcement authorities to conduct a preliminary inquiry before registering an FIR under the Act and also seeking prior sanction before arresting an accused. The Maharashtra government has also prayed that they the directions be kept in abeyance till the next date of hearing.

Furthermore, a bench comprising Justices AK Geol and U U Lalit reportedly said it has taken note of the government’s plea for review and will examine its previous order which imposed stringent safeguards on arrest under the Scheduled Caste and Scheduled Tribes (Prevention of Atrocities) Act.

The bench had clarified that its judgment won’t stand in way of awarding compensation due to affected parties or registration of FIR in instances of conjoint offences.

Here on Tuesday AG Venugopal sought an urgent hearing of the plea and requested that it should be heard in an open court. Chief Justice of India Dipak Misra, before whom the matter was mentioned, listed it for hearing before the bench of Justices A K Goel and U U Lalit, notes Indian Express (IE) in its report.

It was on Monday during ongoing ‘Bharat Bandh’ dalit agitation that the central government moved the SCI against the alleged dilution of the SC/ST Act. The court had previously laid down the stringent safeguards before registering a case under the Act.

In its plea, the government told the court that potential misuse was not a valid ground for reading down stringent provisions of the Act and diluting it would deprive SC, ST communities the rights guaranteed under the Constitution.