SCI Judgement on Aadhaar: Its Valid; But Not Mandatory for Banks, SIM Cards and School Admissions

New Delhi/Chandigarh: The Indian Supreme Court today upheld the validity of the Aadhaar Act that was passed by the BJP government in 2016 as a Money Bill in the Lok Sabha where government had absolute majority. Passing the law as a money bill had empowered the government to bypass the Rajya Sabha, upper house of Indian Parliament, where the Modi government did not have sufficient numbers.
Announcing a 4:1 majority verdict, the SCI upheld the constitutional validity of the Aadhaar Act but struck down some of its provision.

The majority judgment, written by Justice AK Sikri in concurrence with CJI Dipak Misra and Justice AM Khanwilkar, upheld seeding of PAN with Aadhaar, it set aside linking Aadhaar to bank accounts and mobile phone numbers. In his concurring decision, Justice Bhushan said the Central government had given sufficient reasons to uphold Section 7 of Aadhaar Act, which deals with grant of subsidies and welfare benefits. 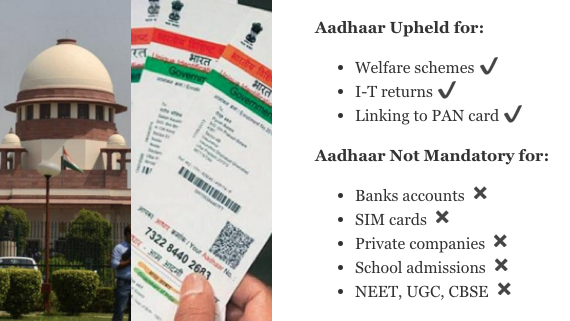 However, in a dissenting judgment, Justice Chandrachud said the Aadhaar Act was liable to be struck down as being violative of Article 110. “Rajya Sabha should not have been bypassed,” he said, referring to the government passing the Aadhaar bill as a Money Bill in the Lok Sabha, where it has an absolute majority. He also asked telecom operators to delete all data they had collected from users.

Ruling that Aadhaar was not compulsory for school admissions, the SC said no child could be denied benefits of any scheme for not having Aadhaar number. “CBSE, NEET, UGC cannot make Aadhaar mandatory, also it is not compulsory for school admissions,” Justice AK Sikri, who is part of the five-judge bench that heard a clutch of petitions challenging the constitutional validity of the Aadhaar Act, said.

Aadhaar Not Mandatory for:

Congress party has announced to challenge the verdict before a seven judges bench of the Supreme Court of India.

“One important part of judgement to be noted is — if in the future a Lok Sabha speaker declares a bill as Money Bill, then the court can review this and revert. We will approach a seven-judge bench to consider this verdict again as this is clearly not a Money Bill,” said Kapil Sibbal.