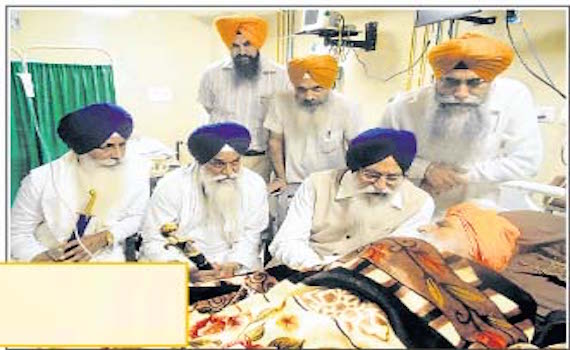 “The Supreme Court of India has put many conditions on premature release of life term convicts and we tried to convince ‘Bapuji’ to end his hunger strike” said Makkar, adding that “[b]ut he refused to agree to our request. Hence we can only urge state and centre government to speed up their efforts”.

This is the first time that Akal Takhat Jathedar and SGPC president came to meet Bapu Surat Singh.

A news reported by the Indian Express (IE) quotes Kanwarpal Singh, spokesperson of Dal Khalsa saying that the Punjab police had already given a cold shoulder to the issue of release of Sikh political prisoner.

“After Gurdaspur attack, it will be once again a difficult task” he said. He emphasised that the Dinanagar episode has no link with the demand of release of Sikh political prisoners, but feared that the Punjab police will get an easy excuse now.