Activists of Dogra Front and Shiv Sena termed Geelani as an “anti-national” who would (allegedly) further fuel militancy in Jammu and Kashmir.

These two Hindutva groups also took out a procession in Jammu and burned a Pakistan’s flag and an effigy of the pro-freedom Kashmiri leader. 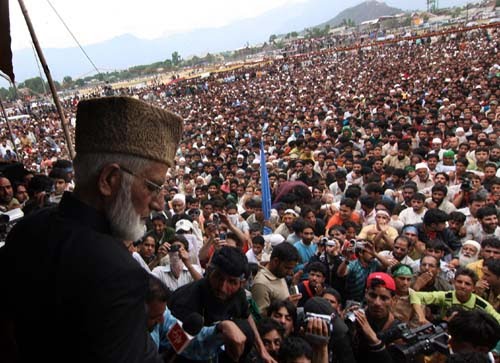 “Why is the government of Jammu and Kashmir not sending Syed Ali Shah Geelani to Pakistan on an exile from India? His only work is to chant pro-Pakistan slogans, wave Pakistan flag and disrupt the peace in the Valley and bring turmoil in Kashmir,” state president of Shiv Sena and Dogra Front Ashok Gupta said.

“If he loves Pakistan so much that he waves Pakistan flags in Kashmir and challenge the duration of Amarnath Yatra, then he must be sent to that country,” he said.

“The coalition government has been a complete failure as in less than one month. This is the second time that the Pakistan flag has been waved on Indian land, which is a very serious crime under the state law”, a news report published by The Hindu quotes Ashok Gupta.