Gobindgarh, Punjab: Around hundred armed activists of Shiv Sena today attempted to burn an effigy of great Sikh martyr Sant Jarnail Singh Bhindranwale in Gobindgarh, which led to tensions in the city.

Armed Shiv Sena activists were raising slogans against Sikh martyrs and when they tired to burn the effigy of Sant Jarnail Singh Bhindranwale they were challenged by some Sikhs. 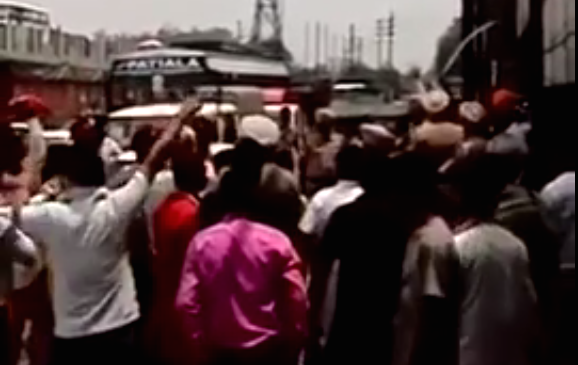 A view of clash at Mandi Gobindgarh

Some reports say that there were only three Sikhs who challenged around hundred Hindutva activists. When Singhs raised Jakaras Shiv Sena activists fled the scene leaving behind the effigy which they were trying to burn.

Sources said that when the police reached the spot they took three Sikh youth into custody.

Members of Shiromani Akali Dal (Amritsar) reportedly talked to the police and secured the release of arrested Sikh youth. SAD (Amritsar) has called a meeting for tomorrow to discuss the situation. Sikh leaders have demanded strict action against Shiv Sena activists.