Bombay:  With Udhav Thakray lead Shiv Sena winning 84 seats on Thursday in the recently concluded Bombay Bombay Municipal Corporation (BMC) elections is been seen  by many as the party is slowly loosing ground in its Marathi strong hold as with BJP wining 80 seats the former is narrowly ahead from its former ally in 227 strong BMC house. 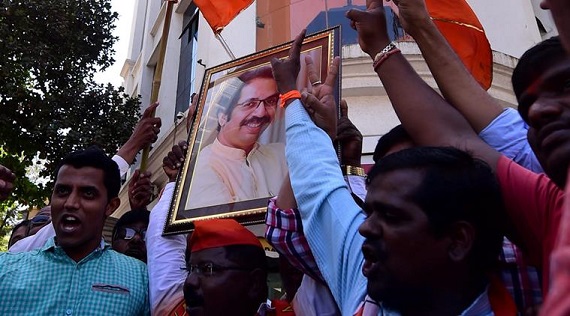 Mumbai: Shiv Sena activists celebrate over the results of BMC Election results in front of Sena Bhavan in Mumbai on Thursday. (Express Photo)

The the second main opposition party congress was at receiving end with as it was able to secure only 31 seats, it being considered as one of the worst performance by the the party in the last 25 years. Followed by NCP with 9, MNS with 7, AIMIM with 3, Samajwadi Party with 6, Akhil Bharatiya Sena with 1 and others with 4.

As reported by the media the five key factors that came out of this election are as follows:

1: Sena’s three-decade hold on Mumbai and the Marathi manoos vote bank have slipped, with BJP emerging a real threat.

2: BJP’s score in Mumbai and seven of the 10 civic bodies that went to polls shows that BJP has captured the urban mandate and imagination in Maharashtra

3: The BJP has eaten into the Congress space in all big cities. Congress’ internal rivalries, poor discipline and organisational mess are at the root if its defeat in Mumbai.

4: Demonetisation was not a factor in these polls: most cities and even rural areas have not punished the BJP for it.

5: CM Devendra Fadnavis has consolidated his position, and the Sena is now unlikely to trouble his government in view of Thursday’s mandate.