The assailant shouted that [a]nti-nationals like Kanhaiya Kumar should not be allowed to speak. He was later overpowered by the police, who took him away.

Continuing his conversation with the media Kanhaiya Kumar remarked that such incidents do not matter to him.

Earlier at the press conference, JNUSU student leader who is facing sedition charges in a Delhi court alleged that educational institutions were under attack from Hindutva forces like RSS and BJP. 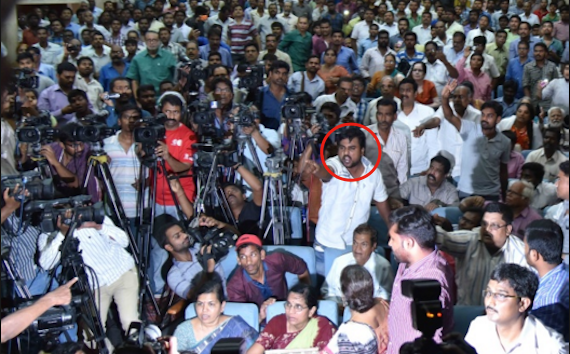 Addressing media persons Kanhaiya Kumar said: “The struggle in JNU is an extension of the campaign in Hyderabad Central University (HCU) for justice to Rohit Vemula. There is a similarity between HCU and JNU in the context of attack on autonomy of universities and fight of social justice,” he said.

Citing examples of FTII, Aligarh University, HCU and JNU, he claimed that the campuses are becoming war zones.

After arriving in the city yesterday, the student leader blamed the Centre for blowing up the issue of ‘anti-national slogans’ at JNU to divert attention from Rohith’s suicide and its aftermath.

Yesterday Kanhaiya Kumar was not allowed to enter the HCU campus where he was scheduled to address students agitating for the resignation of the vice chancellor for his alleged role in the suicide by Dalit scholar Rohith Vemula.

Kanhaiya Kumar, who came with Rohith Vemula’s mother and brother to express solidarity with the students, was greeted with slogans for and against him at the University gate. The University administration had barred the entry of outsiders, including political parties, media and other social/student groups.