Chandigarh (Press Release): Perturbed over the stubborn attitude of the government of India with regards to the situation in Kashmir, its unrelenting role of disrespecting human rights in the region where the special status of the people and the state has been unilaterally abrogated, political parties from Punjab, Tamil Nadu and Kashmir will hold Justice March and Rally in Delhi on September 26.

The March and rally will be organized jointly by Shiromani Akali Dal (Amritsar) and Dal Khalsa in which representatives of United Akali Dal, Sikh Youth of Punjab will join. Leaders and activists of political party Naam Tamilar Katchi from Tamil Nadu and Committee for Release of Political Prisoners from Delhi will also participate in the public demonstration at Jantar Mantar on the eve of Prime Minister Narendra Modi’s address to the UN General Assembly, scheduled for September 27.

While addressing the press conference here today, leaders of all the parties declared that minorities and nationalities will speak in India’s capital to uphold the right of the Kashmiris to speak. While Prime Minister of India will present his side of story on Kashmir’s so-called integration into India at the United Nations session, we will speak on behalf of the population, who have been detained at gunpoint and their lives paralyzed since August 5. 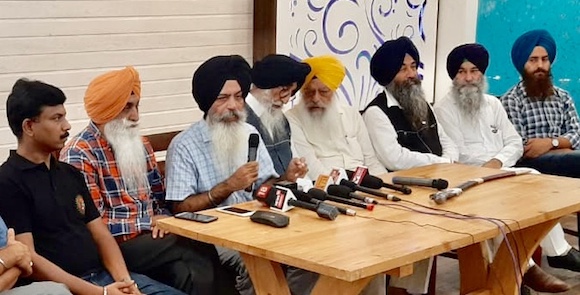 The leaders announced that in India they would hold the demonstration and at international level our aligned group Sikh Youth of America and our own organizational units in US will join with Sikh, Tamil and Kashmiri Diaspora outside UN headquarters to protest against India’s highhandedness against minorities and lockdown in Kashmir.

SAD (Amritsar) president Simranjit Singh Mann said with more than 40 days of continued incarceration of an entire population of the valley, concerned political groups, human rights bodies, civil liberties champions and those who love Kashmir as much as they love Kashmiris have decided to converge on Jantar Mantar to express their solidarity with the people of Kashmir and protest against the continued subjugation by the Indian state.

This Justice Rally will serve as a rallying point to unequivocally declare that the problem of Kashmir, the rights of the people of Kashmir is an international issue and not a bilateral one as India, the Security Council or the United Nations think it to be, said Dal Khalsa head Harpal Singh Cheema. While we are comforted that the United Nations is raising its pitch of consternation against India on the overall situation in Kashmir, there is still a vast room to do more, added party spokesman Kanwar Pal Singh.

A state of numbness, pseudo-nationalistic and ultra-nationalism is sweeping the country, said Paramjit Singh Mand, president of Sikh Youth of Punjab.