Amritsar, Punjab: Perturbed over the plight of Kashmiri people who’s rights are being suppressed and abused en masse by the India’s fascist regime led by PM Narendra Modi, the Dal Khalsa along with SAD (Amritsar) has decided to observe the World Human Rights Day on the soil of Kashmir, where the worst human rights violations have occurred during 2019.

Being geographical neighbours of Kashmir, it is our duty of Sikhs of Punjab to rise to the occasion and continue to protest the deteriorating human rights situation in Kashmir, said Dal Khalsa leaders at a press conference held at party office. 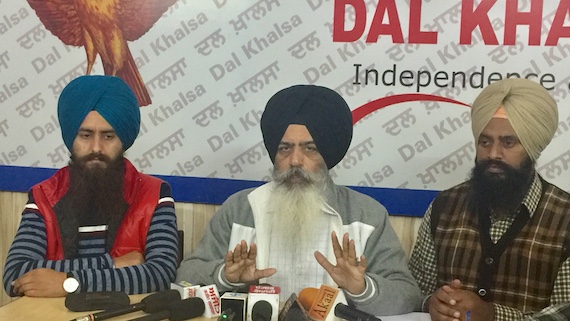 Giving a call to human rights defenders to join the peaceful sit-in at Lal Chowk on December 10, he said teams of both the organizations led by Simranjit Singh Mann and Harpal Singh Cheema will proceed towards Kashmir from Amritsar, Gurdaspur and Hoshiarpur on Dec 9 and reach Srinagar the next morning (10th). He said UAD president Gurdeep Singh Bhatinda and Akal Federation head Narien Singh would also join the march.

Dal Khalsa appeals to all human rights bodies and civil rights groups worldwide to spare a thought for the people of Kashmir when they observe the 72 years of World Human Rights Day in their states and countries.

Deriding international bodies for paying only lip service to the cause of Kashmir, the Dal Khalsa statement stated that, “The suppressed people of Kashmir need succour, support and an international voice to uphold their rights.”

On the occasion of Human Rights Day, Dal Khalsa will also voice concern about systematic denial of justice in Punjab in the Maur Bomb blast case, the Behbal Kalan firing case and Bargarhi sacrilege cases.

The Dal Khalsa will also take the cause of custodial torture, illegal detention and harassment of under trials, prevalence of archaic laws, like 124-A, UAPA, denial of reprieve to political prisoners and special concessions to police personnel responsible for human rights abuses.

To a question on BJP Govt’s U-turn on commuting death sentence of Balwant Singh Rajoana, he said the Modi dispensation has played fraud on Sikhs that too in the name of giving special remission to Sikh prisoners on the sacred occasion of 550th Parkash Purab Of Guru Nanak. “Indian leadership is habitual of ditching the Sikhs since 1947 and traditional Akali leadership is immune in facing such betrayals and embarrassments”.