Ajnala, Amritsar: The claims of Punjab chief minister Captain Amarinder Singh solving the case of the Nirankari Bomb blast in less than 72 hours and the statements of families and villagers of the alleged accused countering & contesting CM’s claims had raised huge doubts which prompted the Dal Khalsa leadership to visit the families of Bikramjit Singh in village Dhariwal and Avtar Singh in Chak Mishri Khan.

During our visit to the families and meeting village elders of the two alleged accused in the Amritsar bomb blast incident at the Nirankari Bhawan in Adilawad village of Rajasansi, we founded glaring gaps in the police theory, said Dal khalsa leadership.

The incident of blast happened on Sunday morning and the police raided the house of the alleged accused on Monday night. Bikramjit Singh was arrested on Monday night around midnight and only after illegal detention for more than 36 hours was his arrest formally recorded. At the same time, Avtar Singh’s house was also raided but as he was not found, his father was detained and he is still under illegal detention with the police. 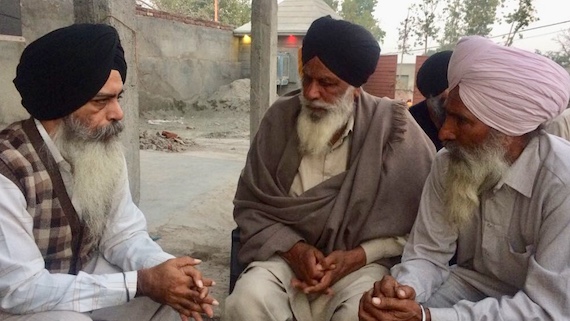 Speaking to the media, Kanwarpal Singh said, “If Bikramjit Singh was detained on Monday night, why was his formal arrest delayed till Wednesday afternoon? Its obvious that the heavy contingent of police arrested him at midnight after obtaining evidence against him. If that is so, then “what was the rationale for day long detention and harassment of Sikh youth associated with the Dal Khalsa and other organisations in Amritsar and Batala on Tuesday ?

Kanwarpal Singh claimed that both the families we met stood by their version that Bikramjit was arrested on Monday night from his house and so was Avtar’s father and that their wards were innocent and that they were not involved in any such unlawful activity.

Family members told us that they met Bikramjit Singh at Ajnala court today.

Another fact that was highlighted by the Dal Khalsa leader, who toured the two villages with Dal Khalsa team members, was that the SHO of Lopoke, who visited Chakk Mishri Khan village last night, entered the house of the cousins of Avtar Singh and hurled verbal abuses at the women in the house. He used derogatory language for Sikhi head gear the women’s were wearing. He urged the DGP to take note of it and discipline the force.

Kanwarpal Singh confirmed that his party would keep a tab on the developments and they would ensure that no illegality of the police goes unnoticed.