Connecticut, USA: The Governor of Connecticut, Nad Lamont has issued a proclamation about the Sikh Genocide 1984 Remembrance Day in Connecticut. Connecticut is one of the states of United States of America (USA).

⊕ A COPY OF PROCLAMATION ISSUED by GOVERNOR OF CONNECTICUT: 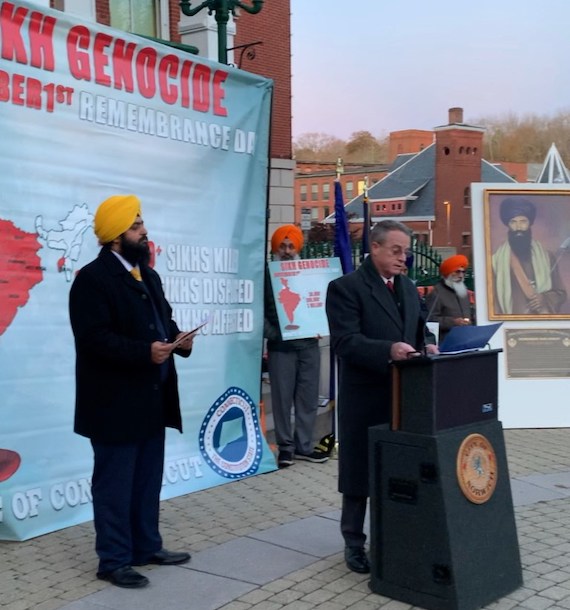 Mayor of City of Norwich Peter Nystrom reading another proclamation issued by the City Council of Norwich. Behind him (of left) is S. Swaranjit Singh Khalsa

He said that a Sikh Genocide 1984 remembrance day event was held last year in State Capitol of Connecticut after a state law was enacted to mark the Sikh Genocide Remembrance Day on annual basis.

This year an event was held on November 9 where Alderman Joe Delucia read the proclamation on behalf of Governor of Connecticut Ned Lamont and recognised that there is great need for education on this topic, he added.

Growing Recognition for the Fact of 1984 Sikh Genocide:

The Indian state orchestrated a series of genocidal massacre of Sikhs during November 1984. Thousands of Sikhs were brutally killed and lakhs were displaced as a result of this genocide.

The Indian state did not only deny the justice and patronised the culprits, it is also attempting to deny the fact of genocide.

Despite India’s denial the fact of genocide is acknowledged by the state assembly of Delhi in India, provincial parliament of Ontario in Canada, State of Connecticut and Pennsylvania in United States besides many city councils in the Untied States. Recently the fact of 1984 Sikh genocide was also admitted by Delhi High Court in one of its judgements.