Pathankot: Tension continued to prevail in Pathankot after a school management razed a portion of a Gurdwara Sahib located on the Mission Road area on Friday.

Sikh sangat and local residents protested against the action on Sunday and demanded registration of criminal cases against the people involved in the act, notes Daily Mail.

Protesters alleged that the Gurdwara Sahib was demolished by the management committee of Harkrishan Public School which controlled the affairs of the shrine as it wanted to construct a shopping mall.

As per media reports a mild clash also took place between school’s staff and members of the Sikh Sangat. 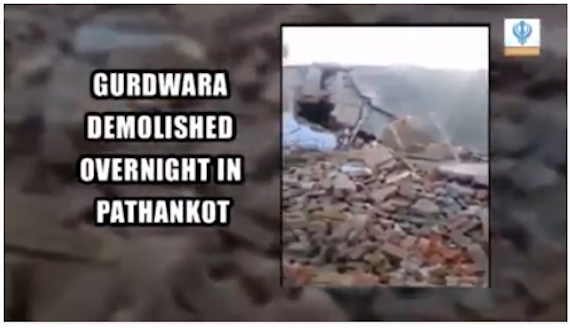 Pathankot DC Sukhwinder Singh said that the security has been tightened in the area to prevent any untoward incident.

He said that a committee has been formed to probe the allegations which will submit its report within four days.

“We have appealed the people to stay calm,” he added.

Sukhjit Singh Khosa, a leader of Sri Guru Granth Sahib Satikar Committee, said that the administration has taken four days time to investigate the matter and take action against persons involved in demolition of Gurdwara Sahib.

He criticised Badal government for helping those who are involved in demolition of Gurdwara Sahib.