Sydney: With the aim of providing much needed support platform for Sikhs in Australia, the Sikh Helpline service is launched by Red Khanda Inc. The Helpline sewa run by volunteers will provide Australia-wide sangat confidential counselling, information and help on various issues in Punjabi and English.

Presence of Sikhs in Australia can be traced back to early settlement periods but the number of Sikhs in Australia since those periods had not grown much until the end of 20th century mainly due to white Australia policy and Sikhs from Punjab favouring Canada, UK and USA over Australia. This scene has changed in last 10 years when young Sikh students and skilled migrants shifted their focus to Australia and made down under their home. The Sikh Australians are positively contributing to growth and development of their adopted country.

While Sikh Australians report their experience in Australia en masse as good, the challenges faced by Sikh Australians cannot be pushed aside. Living away in foreign land and as minority immigrant in adopted country is never easy but for Sikh Australians the incidents like 9/11 and Martin Place siege bring alive realities of racism and hatred. Adults and children come face to face with bullying, harassment and discrimination on day to day basis. Some can deal with situations on their own, others need some system of support to gather a response to these problems. 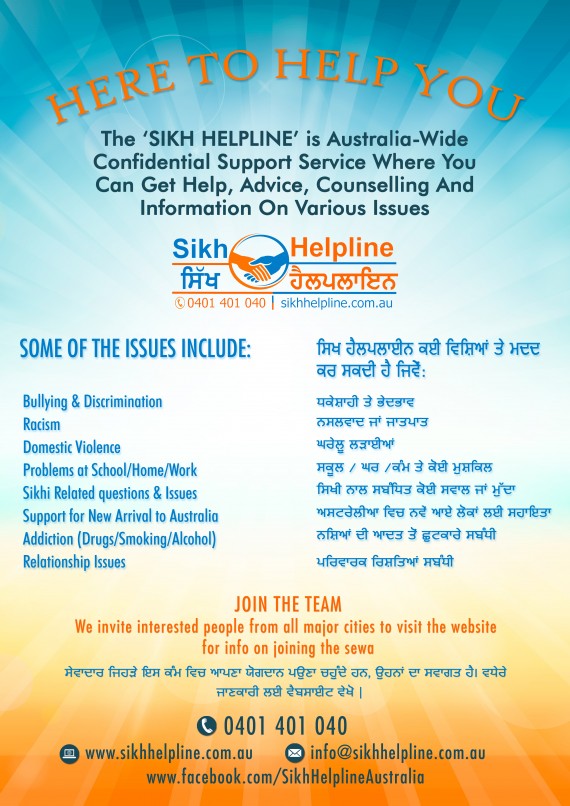 Then there are our in house issues which need to be attended. Although Sikhi propounds abstinence from intoxicants and mandates equality, but the harsh truth is that some Sikh households do suffer from domestic violence, addictions etc. Due to stigma attached with such issues the victims don’t want to discuss things openly and need community support. Growing up in high pace modern materialistic societies either gives one less exposure to Sikhi or sometimes causes confusion and conflicts within about ones faith and identity.

Above are some examples of situations and circumstances when one needs to seek help and guidance. With a view to help fellow Sikhs in need to help in such situation Sikh Helpline Australia is being launched.

Sikh helpline will offer assistance with range of issues including: