Amritsar: A shocking incident of attack on a Sikh man by a mob in Karnataka has come into light. Victim Avtar Singh, 25, works as a JCB driver with a private company in Karnataka. On the evening of 19 May after finishing his job he was going to an ATM in village Kodla village (Gulbarga) when a mob of local Hindu residents stopped him. Being an Amritdhari Sikh, Avtar Singh was wearing a Kirpan to which the mob objected.

“I told them that this was a Kirpan and every Amritdhari Sikh wears it but they insisted that I must remove the Kirpan”, Avtar Singh told Sikh Siyasat News (SSN) over phone. “As I was also wearing a small Kirpan underneath my shirt I removed the Kirpan and I was once allowed to go”, he added. 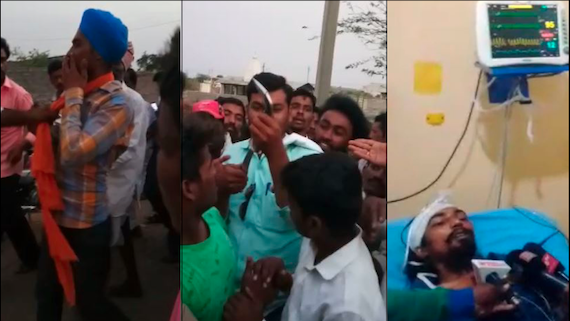 Avtar Singh says he was attacked on May 19 Kodla village in Karnataka for wearing Kirpan | Photos source: PTC News

Avtar Singh said he had barely waked a few steps when the mob suddenly approached him and attacked him. He said that he was severely beaten up and his Kankars were removed. “I was kept confined in the Panchayat Ghar of Kodla and the mob broke a bone of my feet. I have received injuries on face, head and other body parts. They cut my hairs also”, said Avtar Singh who is presently hospitalised at United Hospital in Gulbarga.