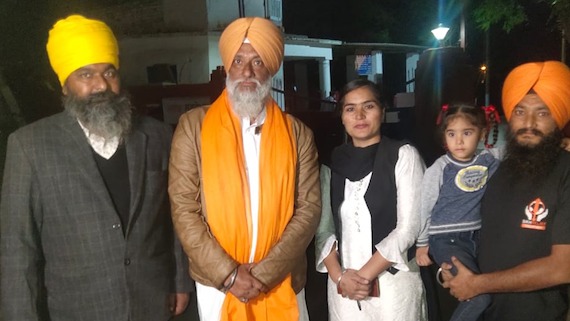 Last week another Sikh political prisoner Bhai Nand Singh was released under directions from the GoI.

Notably, both Nand Singh and Subegh Singh were arrested and sentenced in a case that was not linked to the Sikh struggle. Their name was attached with Burail jail break case of 2004 when Bhai Jagtar Singh Hawara along with 3 others had escaped from Chandigarh Model Jail.

As the GoI had announced to convert death sentence of one Sikh prisoner into imprisonment for life, it was clear that it was Bhai Balwant Singh Rajoana because he was only Sikh political prisoner was on death row.

Documents accessed by the Sikh Siyasat News (SSN) have ended the confusion about names of Sikh political prisoners who are granted remissions and were to be released from prison.

A letter dated 11 October 2019 by Arun Sobti (Deputy Secretary (PR & ATC) of Ministry of Home Affairs of India says that on the occasion of commemoration of 550th [Parkash Gurpurab] of Guru Nanak Dev Ji, the Government of India has decided that 8 Sikh prisoners may be granted special remission and death sentence of one Sikh prisoner may be commuted to life imprisonment. The letter mentions that details of these nine Sikh prisoners were given at Annexure.

The three page Annexure to the letter contains these names:–

Case of Commutation of Death Sentence to Life Imprisonment (1):

Interestingly, Harjinder Singh @ Kali whom the Government of India announced to grant special remission in case FIR No. 26/87 (PS Div. No. 6 Ludhiana) was already acquitted by the Supreme Court of India.

Balbir Singh Lamme was Sentenced to 5 Years Only:

The issue of release of Sikh political prisoners pertained to release of Sikh prisoners were sentenced to imprisonment for life and were not being released despite having completed minimum mandatory terms of their sentences. Baba Balbir Singh Lamme who is granted special remission by the Government of India was sentenced to only five years imprisonment. Notably, Baba Balbir Singh was already on bail.

Sikh political prisoners who are sentenced to imprisonment for life in former CM Beant Singh execution case were left out by the Government of India. The list of 8 Sikh prisoners who are to be released does not contain any name of Lakhwinder Singh, Shamsher Singh or Gurmeet Singh who are undergoing imprisonments for life in this case. It was expected that these three Bandi Singhs would also be granted premature release.

⊕ COPY OF THE MHA LETTER AND LIST OF PRISONERS:
MHA Letter and List about release of Sikh Political Prisoners