A video of the incident has gone viral over social media and it is also played by mainstream media channels. It shows that a white vehicle hits the barricades placed by the police after which police personnel starts hitting the vehicle sticks. Abusive language could also be heard. 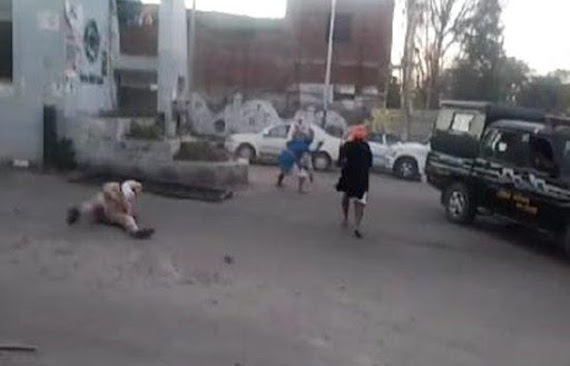 A still grabbed from the video of the incident | Source: Internet

Suddenly, some (two-three) Nihang Singh come out of the vehicle and in seconds the surroundings are cleared, as they used their traditional swords in this clash with cops.

As per reports, the hand of an ASI level cop named Harjit Singh was chopped off. Few other cops also sustained injuries.

Media reports say that Nihang Singhs then left the spot with their vehicle.

As per reports, Nihang Singhs went to Gurdwara Khichri Sahib in the Village Balbera of district Patiala. Soon the Patiala police along with Punjab police commandos from Bahadurgarh surrounded the Gurdwara complex and asked Nihang Singhs to surrender. The police claimed that it made announcements through the public address system and persuaded the Sarpanch and some villagers to go in and persuade Nihang Singhs to come out.

Instead of heeding to the police announcements, Nihang Singhs followed Guru Sahib’s command of remaining independent (‘sutantar vicharna’). Then the police ensued its action.

As per a statement released by Punjab CMO 11 persons, including a woman, were arrested.

As per reports one Nihang Singh was shot during the police action, who is said to be hospitalised.

Two separate cases have been registered by the police.

Mainstream media, whether electronic or online, presented a one sided narration of the police version of the incident, while speaking out vilifying terminology.

Why Nihang Singhs Were At Sabzi Mandi? — Media Is Not Interested in it:

Interestingly, it is overwhelmingly missing from mainstream media’s narration that why Nihang Singhs were at Patiala Sabzi Mandi?

A social media journalist, who has worked with mainstream media channels, expressed her surprise in Facebook status that no one from the mainstream media was even interested in getting the version of the other side (Nihang Singhs).

As per reports from social media, Nihang Singhs had gone to Sabzi Mandi to buy vegetables for Lagar.

The incident triggered strong reaction on twitter, where majority of twitteratis accused Nihang Singhs for being ‘barbaric’, while at the same time calling for ‘encounter’ killing of Nihang Singhs.

Facebookies expressed a mixed reaction over this issue. On Facebook, voices of condemnation were limited, while an overwhelming voice was raised to introspect the causes behind the incident.

On Facebook many have cited the argument of ‘sovereign’ status of the Khalsa and questioned the police’s authority to ask for curfew pass when the Niahngs had reportedly gone to Sabzi Mandi to buy vegetables for Langar.

Their argument is that when it is a well known fact that Nihang Singhs do not consider them bound by worldly laws or legal authorities, then why Mandi Board and police officials tried to stop them asking for curfew pass?

A headline given in Punjab CMO release about today’s incidents reads: “11 Nihang Singhs, INCLUDING A WOMAN, ARRESTED FOR BRUTAL ATTACK ON POLICE TEAM ENFORCING CURFEW AND SOCIAL DISTANCING AT PATIALA VEGETABLE MARKET” (sic).

This headline is a mis-statement as the statement itself makes it clear that two separate cases have been registered about today’s incident and the case related to Sabzi Mandi incident is registered only against four persons, not against 11 persons.