New York: A recently released community update by the Sikh Coalition, a US based civil liberties group, informs that [o]n March 3, 2016, a federal judge ruled that the U.S. Department of Defense could not subject a decorated Sikh soldier to unfair and biased testing on account of his religious beliefs. The Sikh Coalition, in conjunction with the Becket Fund for Religious Liberty and McDermott Will & Emery, sued on behalf of Captain Simratpal Singh to prevent impromptu additional testing that is not required of any other soldier in the U.S. military. 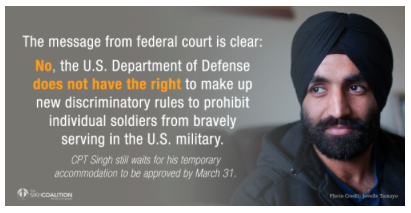 While the court ruled in favor of CPT Singh and banned the tests, he still awaits the final decision on his permanent religious accommodation by March 31, 2016. If the military does not fully accommodate CPT Singh, the Sikh Coalition plans to further litigate the case in our ongoing effort to permanently end religious discrimination by our nation’s largest employer.