Program started with some videos excerpts from 1984 which were captured by international media at that time followed by certain interviews with families of victims of the genocide.

After that different speakers shared their views about various aspects of Genocide including stages of genocide, their identification, relation with Sikh Genocide and its relevance in the contemporary Indian situation 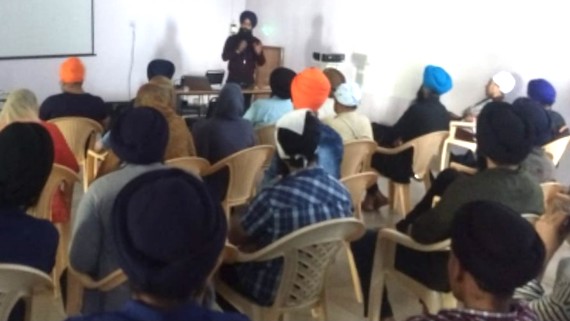 Speakers also shed some light on the definition and understanding of the justice which Sikhs seek and have urged the youth to be very conscious and beware of definition and understanding of the justice being prorogated by Indian mainstream media. Youth have been urged to realize their responsibility and further contemplate on the notion whether Sikhs can ever get justice in these courts? Whether conviction of couple of foot soldiers do full justice such a mass crime of coordinated killings of thousands of people? Youth have been asked to find the definition and understanding of justice from Sikh History and traditions and not from pre-defined notions of justice as being prorogated and taught by the contemporary establishments.
Some speakers also shed light on important aspects of shallow judicial system based on fragile and unjust federal structure.

At the end of the program, Sikh youth wing urged the youth to realize their responsibility by referring the quote of Dr. Gurbhagat Singh which translates as “It is okay to remember the Ghallughara of 1984 but not only as a wound. Nobody can ever forget this kind of loss but breathing nations believe in their future. The indication of a thriving nation is to convert such wounds into a consciousness. In this situation, wounds do not limit itself to just a physical or geographical grievance but becomes a perspective with which we feel the need to re-define and re – understand the philosophy, politics and practice in the contemporary environment”.

It was agreed to arrange more such programs to discuss various facets of the Indian State, it’s motivations, it’s real objectives & the concepts/tools used to fulfill the objectives, which sit at the root cause of phenomenon like genocide and tyranny against minority groups in India.