Srinagar (SHEIKH UZAIR*): In an embarrassment to the Indian Army, a Sikh student from Shopian district was asked by army to remove his turban at a check post at Bahibagh in south Kashmir’s Kulgam district where the army camp of 34 Rashtriya Rifles (RR) is located.

Arangeet Singh, son of Ravinder Singh, resident of Bungham Shopian, levelled these allegations against the army on Wednesday at Press Enclave Srinagar where he came to make his protest. 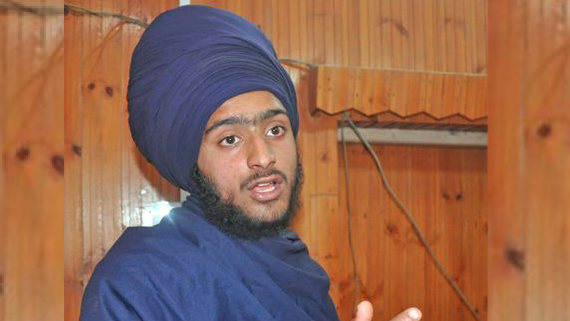 According to Arangeet Singh, a Class 12 student at Government Boys’ Higher Secondary School in Bungham Shopian, he was asked to “remove his turban” at an army check post at Bahibagh. “I was in Srinagar for the service of Gurudwara, collecting funds for the construction of the second floor of our Gurudwara. I went to different places in Srinagar to collect the money. When I was returning, there was a strike in Pulwama so we had to take the Bahibagh road to enter Shopian, where this army camp is located,” said Arangeet Singh.

“We were asked to get down from the vehicle at the Bahibagh camp check post and to show our identity cards. I showed them my tuition card and other documents of Gurudwara but they asked for my Adhaar card,” he said.

Arangeet Singh told the soldiers he had left his Adhaar card at home and assured them that he will be more careful in the future. An army man from a nearby bunker then signalled to his colleague to let them go.

Arangeet said that when they boarded the Sumo vehicle again, an army man came to him and asked why he was wearing a large-size turban.

“I was shocked when the army man asked me this question. I told him it was my religious obligation and a personal matter,” said Arangeet Singh. “The army man told me to remove the turban, which I refused to do.”

Angered by the refusal, the army man asked him to get down from the vehicle, which he did, but the driver, knowing the “reputation” of the army camp, sensed trouble and intervened, Arangeet Singh said.

“The driver pleaded before them and said that he knows me as a neighbour and that I usually wear a big turban. He talked to them for some time, which looked like apologising without any of his fault,” Arangeet Singh said.

Expressing his hurt at the army’s behaviour, Arangeet Singh said that he “respects the army” and they could have waited for more time if the army wanted to ascertain his identity properly.

“What they did was not right. It is a violation of my fundamental rights and an attack on my religious and Kashmiri identity. My religious sentiments are hurt,” he said. “Since this incident I am very depressed and cannot focus on anything. This incident will haunt me for the rest of my life.”

According to Arangeet Singh, he went to the police station to lodge his complaint but he was made to go from one station to another, with the police citing reasons of “Jurisdiction”. Later, along with his community members, he went to complain to army officials.

A JCO from another camp, who also belonged to the Sikh community, apologized to Arangeet Singh on behalf of those army personnel who were involved in this incident and members of his community were satisfied, but not Arangeet Singh, he said.

“This doesn’t make sense: an army officer of my own faith from a different army camp who doesn’t even represent the guilty army men is apologising on their behalf. Those who are involved, they should apologise,” Arangeet Singh argued.
“I want strict punishment for those who were involved in this, so that incidents like these don’t happen again,” he said.

Some people who regularly travel by the camp said that the Bahibagh camp is always in news for reported “harassment and torture” of locals. “This 34 RR camp at Bahigam is infamous for harassing people. Only last month they tortured a youth who was going home after visiting his aunt. He was beaten so badly that he had to be taken to Srinagar for treatment,” a local said.

Later in the evening, when reports of this incident and videos of the youth went viral, Arangeet Singh called the office of Kashmir Reader to say that the army had called him to the Bahibagh camp to “apologise” and “sort out the matter”.

* Above news report was previously published in Kashmir Reader under title: “Sikh youth outraged after army asks him to remove turban” by By Reader Correspondent  SHEIKH UZAIR at source url: https://kashmirreader.com/2018/05/31/sikh-youth-outraged-after-army-asks-him-to-remove-turban/. Its republished as above for the information of readers of the Sikh Siyasat News.