Notably, Dal Khalsa is one the Panthic group that sticks to original calendar adopted in April 2003 and strongly rejects the tampering of Nanakshahi and reverting to Bikrami calendar by the SGPC under pressure from Badal family.

One of the resolutions adopted during today’s gathering says that death at the altar of religious commitment is a prized possession of the Sikh people. Sikh loves death which comes in the course of fulfilment of their social and religious duties. The supreme martyrdom exemplified by Guru Arjan Dev was to uphold the spirit of non-submission to the tyranny of the then rulers. 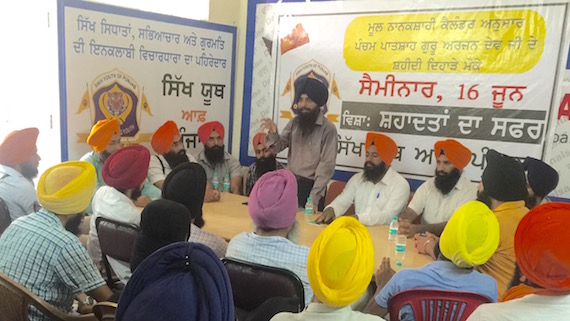 Speaking on the occasion SYP senior leader Prabhjot Singh said it was this spirit of martyrdom of the Guru that serves as a beacon light for the present day Sikhs. He said in June 1984 when the armed forces of India descended upon the holy city of Amritsar with the intention to destroy and desecrate Darbar Sahib and Akal Takhat, the brave Sikhs led by Sant Jarnail Singh Khalsa paid an ultimate tribute to the first Sikh martyr Guru Arjan Sahib, by themselves embracing martyrdom. 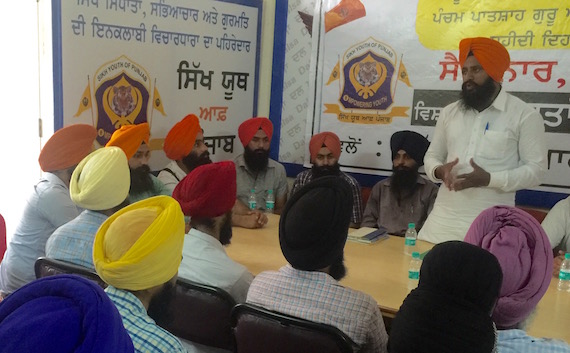 The youth that participated in the discussion were mostly born in eighties of the last century. “Our participation in the Panthic activities is not instantaneous but instinctive,” said Gurpreet Singh, organization’s vice-president. 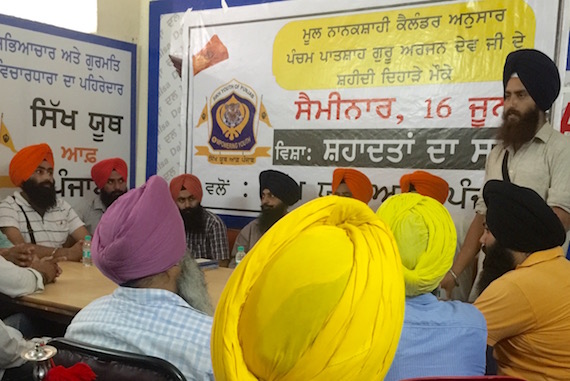 Paramjit Singh Mand, who has done MSc from GNDU while speaking said “I can well feel the sufferings of Sikhs they have been through all those tumultuous period. The UNO should have taken cognizance of the genocide Sikhs faced in 1984.”

President of the SYP Paramjit Singh Tanda held up the sacrifices of Sikh martyrs and their “unimaginable hardships” as a lesson for youth of the modern times. He said what we cannot forget- what we must not forget- is that 32 years ago it was a time when bravery and selflessness of a few was able to change the course of an entire community.

Cautioning Sikh activists against falling into the trap of divisive forces, youth leader stressed on avoiding maryada issues that have a potential of dividing the Sikh community. He said “We have to be cautious against any mischief. Without naming anyone, he said elements that wanted to create a wedge between the Sikhs were active these days.

After the seminar, they went to nearby gurdwara and performed ardas to pay their respect and homage to the martyrs.