Srinagar: Sikh groups staged protests across the Valley on June 05 against the killing of a youth in the Jammu region on Thursday (June 04).

Sources told Sikh Siyasat News (SSN) that Sikh sangat, primarily youth, gathered outside the Gurdwara Singh Sabha at Lal Chowk in Srinagar to protest against police firing on unarmed Sikh protesters in Jammu. The protesters raised slogans against the Jammu police and demanded strict action against those involved in the killing of Bhai Jagjeet Singh. 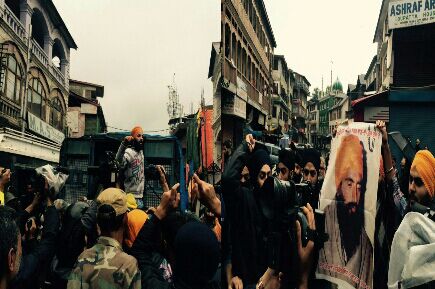 “We condemn the atrocities on minorities and strict action should be taken against the police personnel responsible for the killing,” said All India Sikh Students Federation, J&K Chapter, general secretary Bikram Singh Pappa. 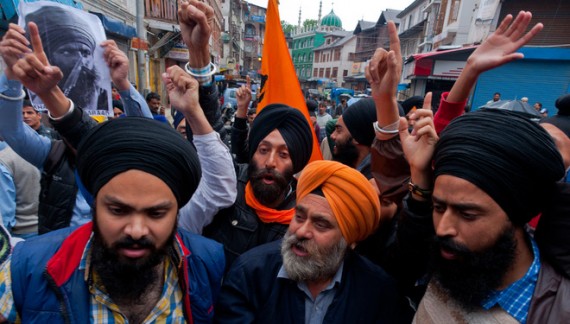 Another view of Sikh protest in Srinagar

Members of the Gurdwara Parbandhak Committee, Srinagar and other Sikh groups also took part in the protest.

A groups of Sikhs also staged a protest at the Press Enclave. Around eight members of the Sikh Students Federation were taken into custody by the police from Lal Chowk.

Sources said that the protests were also held in Baramulla.

The All Parties Sikh Coordination Committee (APSCC) demanded a judicial probe into the incident and immediate suspension of the police officials concerned. APSCC chairman Jagmohan Singh Raina said the members of the community were busy in an annual religious function in Jammu which was objected to by the police. He said  that the police officials worked under the influence and directions of some hardcore elements which were part of the government.

Meanwhile, opposition National Conference has slammed the PDP-BJP combine’s coalition government over the killing of Sikh youth and “insensitive handling” of the situation in Jammu. The NC demanded a thorough and time-bound probe into this death and also into the circumstances leading to the clashes.

“Protests happen everywhere in the world and to protest is the right of every person, but Jammu & Kashmir is the only unfortunate region of the world where the protests are silenced with bullets and atrocities,” Geelani said.