Norwich, CT, USA: The Vaisakhi campaign was run by “Sikh Sewak Society International” all over CT mainly focused in Norwich, Montiville, Lisbon and Newlondon County area in which they rented bus shelters locations by Lamar Company to educate fellow Americans about Sikhism and Vasakhi.

The billboards mainly focus on Message “Happy Vaisakhi” and “National Sikh Day” with the picture of Turbaned Sikh and Website ” www.sikhs.org “.

In billboards picture of Sikh Army officer “Kamal Kalsi” in his camouflage turban, “Sanatam Kaur Khalsa” in keski (Turban), Waris Aluwalia and other Sikhs. Other pictures used were of Sikh Boys with Patka . 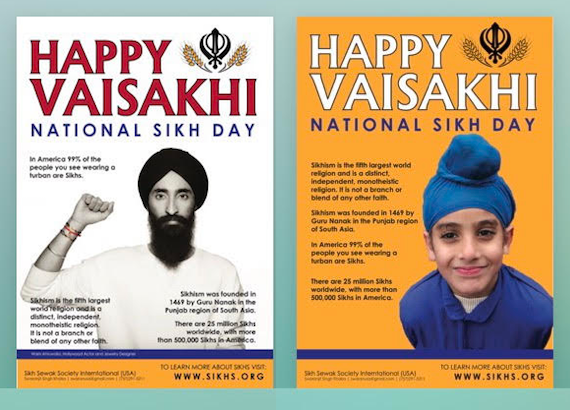 He said: “It is very important that everyone should know that message of Guru Nanak Dev ji was for whole mankind and not for one faith and Sikhs are followers of Guru Nanak”.

Total around 100 signs were posted to create Sikh awareness with focus on lines that “99% people in America who tie Turban are Sikhs”.

Swaranjit Singh Khalsa also requested all Gurudwara Parbandak Committees to take initiative and participate in Sikh Awareness activities. He also thanked Lamar Company for giving them special pricing for this good Cause.