San Francisco/ California: Coinciding with India’s 69th Independence Day, a US based human rights group “Sikhs For Justice” (SFJ) which is spearheading right to self-determination movement will be holding a “Referendum on Punjab’s Future” Conference in Sacramento, the Capital city of California.

The Referendum conference will be broadcast live in India and all internet users will be able to watch the Conference directly from California. The idea behind broadcasting in India is to build the grassroot political campaign and prepare the community to deliver a Yes vote in the Sikh Independence Referendum.

The Punjab Independence Referendum conference can be watched live on August 17 at 7am in India through Sikh group’s Youtube Channel https://www.youtube.com/watch?v=44TlVVcSJyU 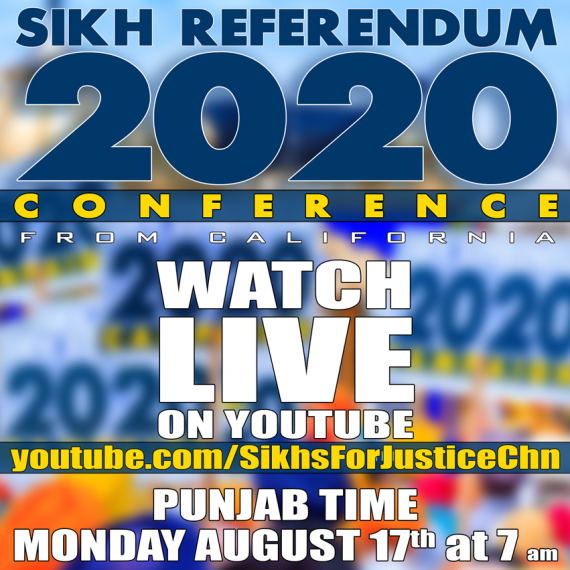 SFJ is campaigning to hold referendum in the state of Punjab in the year 2020 to create an indepedent Sikh country “Khalistan” under the provisions of the International Covenant on Civil and Political Rights. The UN Covenant which guarantees “right to self-determination” to all religious communities has been signed and ratified by India since 1979.

“Referendum 2020” asks the Sikh diaspora to opine on the statement “I aspire for the formation of a sovereign and independent country in Indian occupied Punjab, on the basis that Sikhs are the indigenous people of Punjab, have a historical homeland, a separate religion and have the right to self-determination”.

“We are looking forward to have a peaceful and consensual referendum which will grant the people of Punjab a right to decide about their future” stated SFJ’s legal advisor attorney Gurpatwant Singh Pannun.

“We firmly believe that Punjab should and will become an independent country but the sovereign will of the Sikh people will decide the future in 2020” added attorney Pannun.

The Sikh referendum will be held and managed by independent reputable organizations and monitored by international NGOs and human rights activists. With more than 5 million Sikhs living abroad, polling for referendum will be held in major cities of North America, Europe, Australia, New Zealand, Malaysia, Philippines, Singapore, Kenya and Middle Eastern Counties.