Unlike previous visits when hundreds of Indian Prime Minister fans turned up for his welcome, this visit saw only handful of Modi supporters outnumbered by highly vocal Sikh protestors, maintains SFJ.

Chanting Slogans and carrying placards “Modi The Face of Indian Terrorism”, high-pitched Sikh protestors demanded the right to Referendum in the State of Punjab. 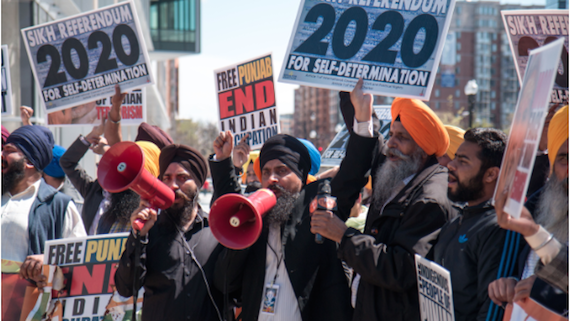 Declaring independence of Punjab as the ultimate goal, SFJ Legal Advisor, Gurpatwant Singh Pannun stated that “The Indian Constitution subjects Sikhs to Hindu laws; We will not allow religious persecution to continue and will pursue the right to self-determination for the Sikhs”. “Sikhs have right to referendum and Indian Govt. must abide by UN Convention on Civil and Political rights”, added attorney Pannun.

Explanation II to Article 25 of the Constitution of India provides that “the reference to Hindus shall be construed as including a reference to persons professing the Sikh”. Based on the constitutional provision, Sikh community of India is being subjected to Hindu personal laws, such as Hindu Marriage Act, Hindu Succession Act, Hindu Guardianship Act and Hindu Adoption and Maintenance Act, it reads further.