Berkeley: Activists and supporters of a US based Sikh activists group staged protest against Indian National Congress vice president Rahul Gandhi on Tuesday (Sept. 11) at University of California, Berkeley. Rahul Gandhi was invited by UC Berkeley to deliver a lecture and SFJ opposed the event saying that Rahul is VC of a party that committed genocide of the Sikhs in 1984.

Protesters were carrying placards “Rahul Gandhi’s Congress is Guilty of 1984 Sikh Genocide” and they raised slogans “Gandhi, Go Back”.

In a written statement issued on Sept. 11, SFJ claimed that [o]wing to a large-scale protest by members of Sikh community at UC Berkeley, Rahul Gandhi was forced to address the issue of November 1984 anti-Sikh  violence and impunity to his party leaders at the event “India At 70: Reflections On The Path Forward”. 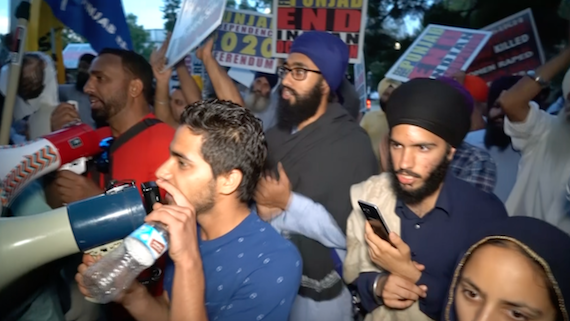 Faced with the question from the host about Sikhs protesting outside International House, Rahul Gandhi answered that “I saw my grandmother shot and I saw my friends shot. I understand what violence does and it doesn’t matter against who it is done. Violence against anybody is wrong and I condemn it. And I fully support any action taken against anybody who has carried out violence. In fact I am with them in their quest for justice. My grandmother absolutely loved Sikhs”.

Ms Sobia Chahal, a student of UC Berkeley confronted Rahul Gandhi with the follow up question “While you have stated that you are with the Sikh community for quest of justice, what actions you have taken against the Congress leaders who are responsible for 1984 genocidal violence against Sikhs”? Refusing to answer the student’s question Rahul Gandhi stated that he “will answer this question in person after the event”.

While Sikh protesters were waiting to confront and question Rahul Gandhi outside International House, Congress had to be quickly frisked away under heavy security and shoes were hurled at Rahul Gandhi’s fleeing convoy.

Terming Rahul Gandhi’s sympathy with the 1984 genocide victims as hypocrisy, attorney Gurpatwant Singh Pannun, legal advisor to human rights group “Sikhs For Justice” (SFJ) stated that “Rahul cannot be with Tytler, Sajjan, Kamal Nath and their victims, at the same time”. “Rahul faced the wrath of the community today at Berkeley and we are ready to confront him again on September 20 at Times Square”, added attorney Pannun.

Just hours before Rahul’s address on September 11, UC Berkeley’s Chancellor Carol Christ responding to SFJ’s request to withdraw speaking invitation to Congress VP, wrote that “We respect your perspective, but this event is being hosted by Institute of International Studies, and the campus administration has neither the desire or ability to force the hosts to withdraw the invitation. As the Chancellor said, Berkeley is committed to the belief that speech we may not like or agree with should be confronted with more speech rather than censorship”.