New Delhi: Despite the stoppages by the Delhi police, acting under orders of the government of India, hundreds of activists from Punjab and Tamil Nadu held a demonstration against 50-day Kashmir lockdown and took out a march from Gurdwara Rakabganj Sahib towards Jantar Mantar. They were stopped by the police on the road to Jantar Mantar where they squatted and made fiery speeches. 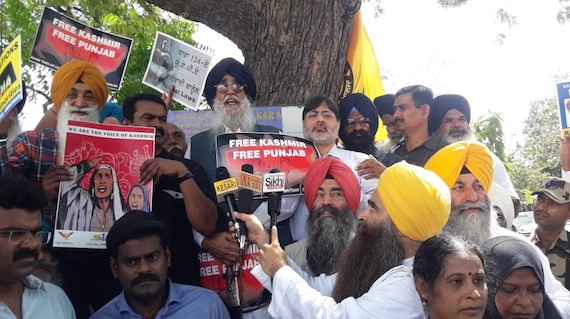 Notably, Delhi police at eleventh hour denied permission to the organizers for a rally and march from Bangla Sahib to Jantar Mantar. 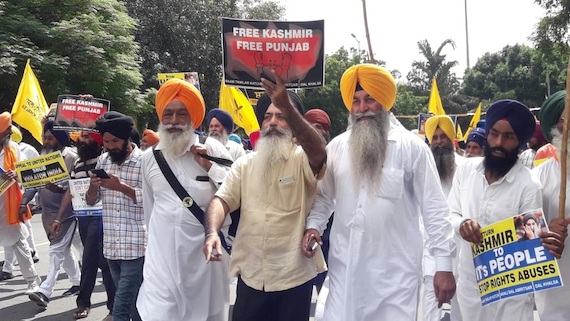 A view of protest march in Delhi

Seeking urgent, immediate and appropriate deliverance for conflict resolution of the problem of Kashmir and implementation of United Nations resolutions on Kashmir, they urged UN to stop the continuing human rights abuses in Kashmir and to ask the government of India to release all Kashmiri leaders and innocent Kashmiris held in large numbers. 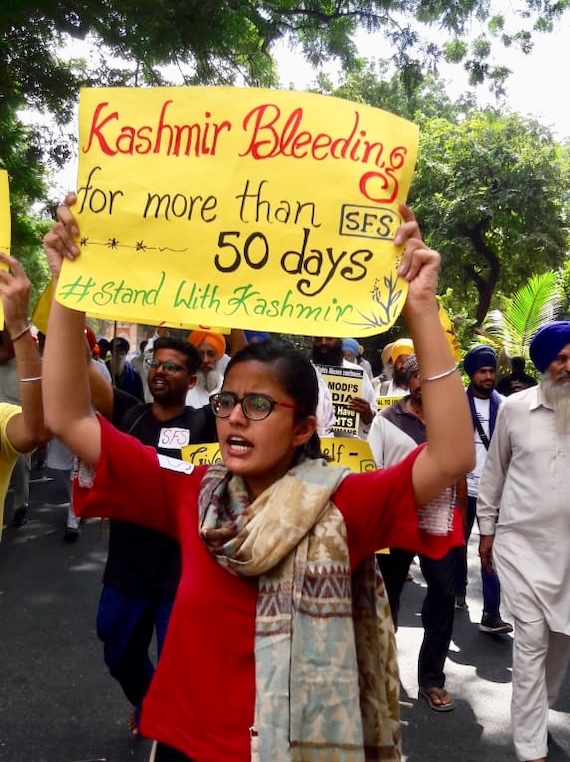 The protesting parties -the Shiromani Akali Dal, Dal Khalsa from Punjab, SFS from Chandigarh, the Naam Tamilar Katchi and Tamil National Movement from Tamil Nadu and Committee for Protection of Rights of Prisoners in Delhi expressed “full solidarity with the people of Kashmir, registered their strong protest against the abrogation of Article 370 and Article 35A of the Indian Constitution by the Narendra Modi-led Bhartiya Janata Party government of India. 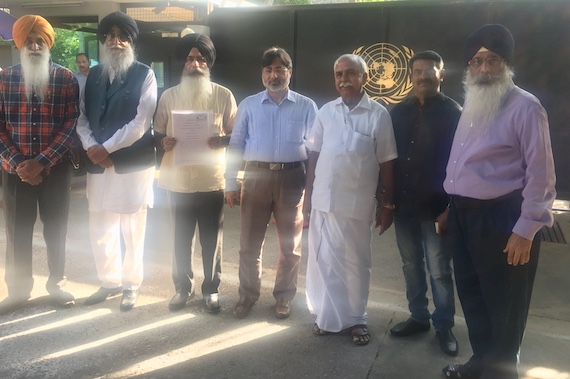 A joint memorandum was tendered at the UN office in Delhi

They choose the occasion to present memo to UN as Indian Prime Minister Narendra Modi will be addressing the UN General Assembly on September 27.

The leaders, one after another reiterated the rights and aspirations of the people of Kashmir. They categorically stated that Kashmir is already in the international domain and notwithstanding “Howdy Modi and Trump” electoral camaraderie, the Kashmir issue is a matter of international concern and not a unilateral decision of India or even a bilateral issue involving India and Pakistan. 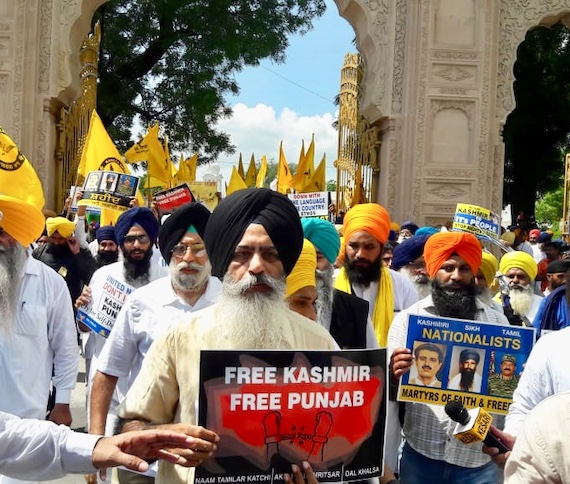 The referred to the Joint Resistance Leadership including ailing and ageing Syed Ali Shah Geelani, who were under house arrest for more than a decade and young leader Yasin Malik who has been imprisoned in a state of deteriorating health.

Shouting slogans in favour of Free Kashmir and Free Punjab, the young activists of Sikh Youth of Punjab urged the Indian govt to end its forced occupation and return Kashmir to its people. 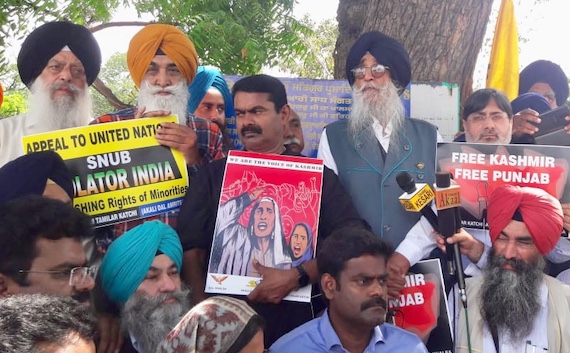 While addressing the gathering Mr Mann said the government of India is feeding lies, offering sops of development and disseminating war rhetoric nationally and internationally, generating hate and war-mongering. The Kashmir question can only be handled and resolved through conflict-resolution. Any other attempt now or later will fail,” said the leaders.

Denouncing the role and stand of the government of India, the memorandum pointed out that, “Since the last two months, Kashmir is under siege, Kashmiris are incarcerated at gunpoint.

Dal Khalsa leader said, “The United Nations has to play a bold historic role in this crucial hour in Kashmir. Presently it is only talking about it one day and then sleeping over it. The people of Kashmir are at the mercy of India’s oppressive regime.”

Tamil nationalist leader Seeman of the Naam Tamilar Katchi, who reached Delhi with many of his party cadres and supporters declared, “We categorically stand for self-determination of the people of Kashmir and Punjab. Everlasting peace in Kashmir and Punjab depends upon upholding the aspirations of the people and giving them the opportunity to exercise of the right to self-determination and plebiscite.”

Tamil National Movement leader Venkatraman said, “Kashmir is bleeding. Kashmir is a militarized zone. We feel the pain and agony of our Kashmiri brethren.

Prof Geelani said the United Nations was not coming to the rescue of Kashmiris, just as did not come to the rescue of the Sikhs and Tamils. The big political lie of Indian being a nation has to be finally nailed.”