New Delhi: In a written press release issued yesterday the Delhi Sikh Gurdwara Management Committee (DSGMC) claimed that film actor Akshay Kumar has agreed to address the objections raised by the Sikh organizations regarding posters, trailers and scenes of his upcoming movie “Singh is Bling”. The controversial film is reportedly heading for release on October 2. 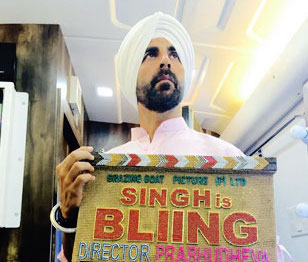 Paramjeet Singh Rana said they had primarily taken up a couple of issues with him. “Firstly, we raised the issue of the movie’s poster which shows semi-clad women having a “kara” in the background. The “kara” also has “gurbani” imprinted on it. Secondly, the official trailer puts the Darbar Sahib in league with alcoholism while mentioning the most famous things in Punjab, which is highly objectionable,” he said.

Paramjeet Singh Rana said the actor gave them a patient hearing and agreed to make changes immediately. “We also expressed our reservation to liquor being shown as one of the things for which Punjab is famous as it shows the community in a bad light. Akshay has agreed to remove that scene as well,” he said.