Ludhiana: Amidst reports of continuous police crackdown on Sikh activists in Punjab, Bapu Surat Singh Khalsa’s struggle and indefinite hunger strike entered 186th day today. Majority of leaders who were arrested by the police on July 19, were committed to judicial custody and they were sent to various jails.

The police has turned village Hassanpur into police cant. Police personnel and commandos have surrounded the house of Bapu Surat Singh and all roads leading to his village are blocked by the police.

Bibi Surinder Kaur daughter of Bapu Surat Singh Khalsa said that her father is demanding release of certain Sikh political prisoners who have already served there minimum mandatory sentences eligible to avail benefits of premature release. “Our struggle is totally peaceful”, she added. 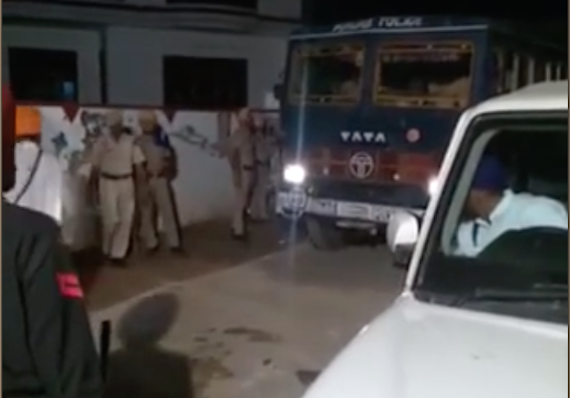 Bibi Sarvinder Kaur said that the Sikh youth agreed to police directions and removed all stuff to which the police had objected, but the police did not kept it’s promise to allow the Sikh sangat to visit our house.

“SSP Ravcharan Singh Brar visited our house and promised that the police won’t stop Sikh Sangat visiting our house to meet Bapu ji, but nothing has changed. Police is not allowing anyone to come to our house” said Bibi Sarvinder Kaur.

Necessary supplies cut by the police:

Bibi Sarvinder Kaur said that the police was not allowing them to bring in daily food stuff such as vegetables and milk. Anyone who goes out of house to bring in stuff of daily need is either arrested by the police or is otherwise not allowed to return.