This information also shows that how blunders of political leaders and Punjab Government authorities were brushed under the carpet by media’s vilification campaign against Sikh Sangat from Hazur Sahib.

It has come into light that Punjabi laborers and factory workers who were strained in Maharashtra were also brought back to Punjab in buses sent to bring back Sikhs strained at Hazur Sahib.

These Sikhs stayed at Hazur Sahib for more than a month.

Punjab Government Sent Buses to Bring Back Yatris from Nanded:

On April 25 the Punjab government sent 80 buses to bring back Sikh yatris from Hazur Sahib Nanded.
Three drivers, one conductor and one policeman were deployed in each bus. Each bus covered a distance of more than 3300 km to and fro. 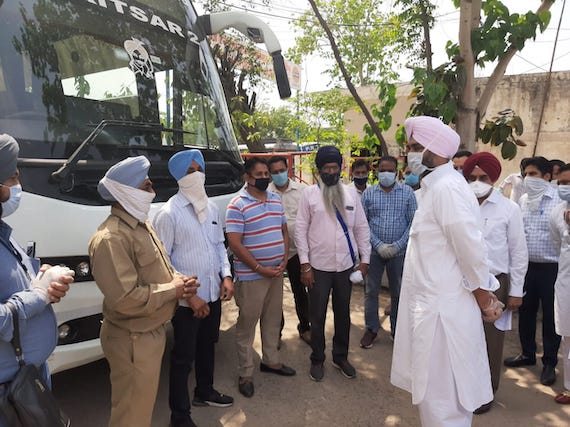 According to Baba Balwinder Singh, Buses were duly sanitized before boarding Sikh yatris and other preventive measures such as use of masks etc. were also observed.

On their arrival in Punjab, some of Sikh Yatris were found positive to COVID-19.

The Sikh yatris were themselves shocked because they had no symptoms of COVID-19 earlier at Nanded.

Karamjit Singh, a Sikh yatri who was found positive on return from Hazur Sahib stressed that none of Sikh yatris staying at Hazur Sahib had shown symptoms of COVID-19.

“We were there for more than a month and were screened thrice. No one had any symptoms” he said.

On being pointed that some people may remain asymptomatic but they still may be positive to Coivd-19, Karamjit Singh said that “all had no symptoms” to stress his point that all were well at Nanded Sahib.

Symptoms of COVID-19 start emerging after a few days of contracting infection. This period is called the incubation period.

According to a document available on the website of the Ministry of Health, Government of India:- [t]he “incubation period” means the time between catching the virus and beginning to have symptoms of the disease. Most estimates of the incubation period for COVID-19 range from 1-14 days, most commonly around five days. These estimates will be updated as more data become available. (Source: https://www.mohfw.gov.in/pdf/FAQ.pdf).

In wake of the fact that all Sikh yatris were screened thrice at Hazur Sahib, Nanded over a period of more than a month and none of them showed any symptoms of COVID-19, and in wake of fact that some of them were found positive after their arrival in Punjab, possibility of having recently contracted infection cannot be ruled out and they did not have symptoms because they were still in incubation period.

Who Else Were Brought Along with Yatris?

Newly surfaced information shows that cotton laborers and workers from Punjab, who were stranded in Maharashtra were also brought back to Punjab along with Sikh Yatris from Hazur Sahib Nanded.

It came to SSN notice today that a retired Army man turned politician Brig. Raj Kumar had posted on his Facebook Account on April 23 calling upon cotton laborers and workers stranded in Maharashtra to reach Hazur Sahib.


“I again appeal to our friends from Balachaur who had gone for cotton work and are stranded in Maharashtra and neighboring states due to reach Gurdwara Hazur Sahib, Nanded.
Permission is received. Arrangements to bring (you) back in Punjab are going to be made soon.
Many friends have already reached there.
In your service for ever,
Brig Raj Kumar”. (English Translation by Sikh Siyasat)

Point To Be Noted:

On being contacted by Sikh Siyasat News (SSN) Brig. Raj Kumar affirmed that he had arranged the return of Punjabi laborers and workers who had gone to South for work during cotton season, and were stranded in Maharashtra and adjoining states.

He said that about sixty such persons have been brought back to Punjab in buses sent by the Punjab government.

On being asked whether such persons (cotton workers and laborers) stranded in southern states were screened for COVID-19 during their stay for more than a month after lockdown? He expressed ignorance. “I have no information about it,” he told SSN over the phone.

About What Brig. Raj Kumar ‘Lied’?

On being asked whether some of those laborers had reached Hazur Sahib, Nanded before Sikh sangat started returning to Punjab in buses sent by the Punjab government, Brig. Raj Kumar replied in negative.

“It was only after buses carrying Sikh yatris left for Punjab for three consecutive days, Punjabi workers etc. rushed to Nanded”, he said.

“They reached Nanded only at eleventh hour” he added to stress upon his point that they reached there at a later stage.

But in his Facebook post dated 23 April 2020 he had himself said that many “Bahut sathi uthe pahunch chuke han.” Many friends (cotton workers and laborers) have already reached there.

Brigadier Raj Kumar, who is politically active in Balachaur area of Shaheed Bhagat Singh Nagar as ‘halka incharge’ of Shiromani Akali Dal (Badal), ally of Centre’s ruling BJP, wrote a letter to Union Minister Harsimrat Kaur Badal saying: “With your concerted efforts, the process of bringing back our people from Gurdwara Hazoor Sahib has commenced”.

It is notable that this letter was written by Brig. Raj Kumar on April 24- a day before the Punjab government sent buses from Punjab to bring back Sikh yatris from Hazur Sahib, Nanded.

Sikh Yatris Confirm That Other People Came to Nanded To Return to Punjab:

A Sikh yatri who has returned from Hazur Sahib and is presently in an isolation centre at Khadoor Sahib has also confirmed that people from other places had come to Hazur Sahib, Nanded to return to Punjab.

‘After learning that Sikh Yatris from Hazur Sahib were to be taken to Punjab in buses, people from factories located at other places came to Hazur Sahib, who were brought back along with the Sikh Sangat’, said he.

He said that the Sikh yatris were thoroughly screened thrice during their stay at Hazur Sahib and no one was found unwell.

He said that thermal of Sikh yatris was being conducted on a daily basis at Sach Khand Hazur Sahib.

What Was Track of COVID-19 Infection in Nanded:

According to Baba Balwinder Singh (who takes care of Gurdwara Langar Sahib in Nanded) only two cases of COVID-19 infection were found in Nanded, the city which hosts Hazur Sahib, and one of them had already recovered.

He said that after detection of both cases many days had passed and no new cases of COVID-19 were found in Nanded.

It is notable that in India Maharashtra is worst hit with COVID19 influenza.

In such a situation asking people from places, where their screening history was not known, to reach Gurdwara Hazur Sahib was a very serious thing.

Labourers and workers who are brought back to Punjab are also found positive to COVID-19.

According to Daily Ajit, two cotton workers who have returned to Punjab in government buses from Nanded have also tested positive to COVID-19 in Garhshankar.

Who Is To Be Blamed?:

Sikh yatris or the labourers/workers can not be blamed for the spread of infection as they did nothing unusual. They followed instructions of the government authorities or advice of politicians like Brig. Raj Kumar.

It was the responsibility of the government authorities and political leadership to take precautionary steps and avoid mixing of people from different locations, especially those with unknown screening history with the people who were screened thrice since lockdown.

There were clear lapses and irresponsible acts on behalf of the political leadership of Shiromani Akali Dal (Badal) and Congress led Punjab government authorities.

A number of reports have surfaced which expose poor arrangements made by the Punjab government for yatris brought back from Nanded Sahib.

Authorities had sent yatris to their home after having a brief screening, instead of testing them for COVID-19 and sending them to isolation centres.

Karamjit Singh, one of the returnees said that they were sent to their home after thermal screening and giving instructions for home quarantine.

He said that he himself approached medical staff for COVID-19 test.

“There were no symptoms but our family decided to have ourselves tested for COVID-19 as a factor of social responsibility”, said he.

He said that he, along with some other family members, tested positive to COVID-19.

Sikh Yatris Left Trapped in Deras After Bringing Them Back to Punjab:

A number of videos have surfaced over social media which show that Sikh yatris were lodged in Deras where there were poor arrangements.

In these videos Sikh yatris pointed that they were left alone as workers of dera feld these locations after Indian media started vilifying the campaign blaming Sikh yatris for having increased the number of COVID-19 positive cases in Punjab.

These videos also show that there were no proper arrangements of food, water and sensation at various “isolation centres” where Sikh yatris are being kept.

Punjab Government should have made arrangements of lodging Sikh yatris in Gurdwara Sarais based isolation centres, where Sikh sangat or the SGPC could have arranged all facilities for these yatris.

Various sections of Indian media, including ABP News aired vilifying propaganda against Sikh yatris blaming them for resurge in number of COVID-19 positive cases in Punjab.

The shameful hate campaign of Indian media is condemned by Sikhs from across the globe.

Notably, the Indian media simply ignored the fact that Sikh yatris were being regularly screened at Hazur Sahib and Nanded was not a hotspot of COVID-19. These media outlets went further with their propaganda and attempted to vilify Sikh sangat.