Amritsar: Sikh sangat of Punjab is up in arms for more than a week now against incidents of sacrilege of Guru Granth Sahib. After the incident of October 14 police firing in Kotkapura and Behbal Kalan village in Faridkot district, in which two Sikhs were killed and many others were injured, Sikh protest brought Punjab’s life to stand-still. Demonstrations and road blocks were staged to put pressure on the government. Adhering to the pressure, the government announced to withdraw cases registered against Sikh demonstrators and ordered release of all persons who were arrested in relation to last week’s protest demonstrations.

Panthic unity is the foremost need of the hour at this stage but it seems that the struggle is heading towards an unfortunate split. 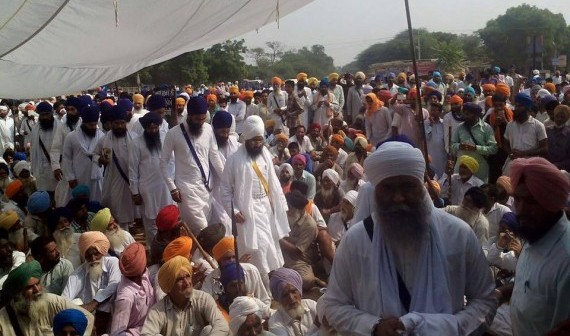 Yesterday Sikh pracharaks, including Bhai Panthpreet Singh and Bhai Ranjit Sindh Dhadrian- who have been leading this struggle form initiation of Kotkapura dharna, announced their interim strategy in order to channelise the Sikh upsurge.

But some Sikh groups today announced their parallel program. A meeting was held by Shiromani Akali Dal Amritsar (Mann) and United Akali Dal (UAD) at Gurdwara Bhai Ladha Ji in Faridkot. As per information Bhai Panthpreet Singh and some other pracharaks had also arrived at the Gurdwara Sahib to participate in the meeting but after an encounter with workers of Mann Dal, they left the meeting.

“School teachers and students, farmers, medical vehicles, Baraats and vehicles carrying stuff of basic necessities such as milk and vegetables would be allowed to move during the road blocks” he said.

However, while talking to the Sikh Siyasat News (SSN) S. Harpal Singh Cheema said that his name was included in this committee without his consent. He said that he was of the view that Sikh pracharaks who have been leading this protest should be allowed to continue and political and social groups should support them.