Amritsar: Punjab Deputy Chief Minister, Sukhbir Badal today alleged that Congress party leader Rahul Gandhi was the biggest enemy of the state. Sukhbir Badal said that by raising the issue of drugs abuse in Punjab, Rahul Gandhi has given proof of his being anti-Punjab.

Sukhbir said that Rahul was out to defame Punjab by branding its youth has drug addicts. Deputy Chief Minister further said that if congress scion really believes about presence of drugs in Punjab then he would do very well to conduct dope tests on youth congress leaders and if anybody among them tests positive then it will be construed as the presence of drugs in Punjab. 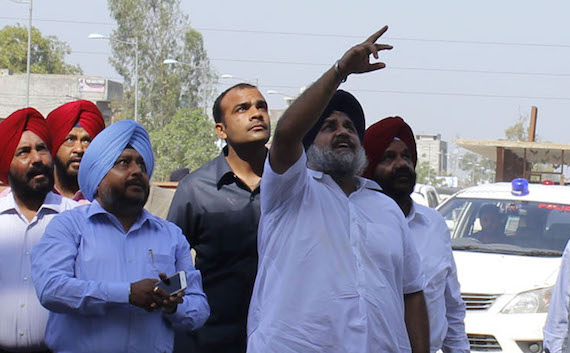 Interacting with mediapersons at information center after paying obeisance at Darbar Sahib (Amritsar) along with his wife and Bathidna MP Harsimrat Badal, Sukhbir Badal maintained that the state has touched heights of prosperity during SAD-BJP regime besides getting numerous awards at India level but still Congress and leaders of other opposition parties are maligning fair name of Punjab by spreading white lies which is in very bad taste. He further questioned that how can a community like Punjabis known for its bravery and feeding whole country be branded as drug addict?