Suspected Shooter was Exercising at Gym, while Weapons used were kept on side in a carry bag: Claims police

Ludhiana/ Fatehgarh Sahib: The Punjab police yesterday announced the arrest of another suspect in RSS leader Jagdish Gagneja and other cases. A press release by police says the total number of arrested suspects rose to five in the six cases involving the killings of seven RSS, Shiv Sena and Dera Sauda men. 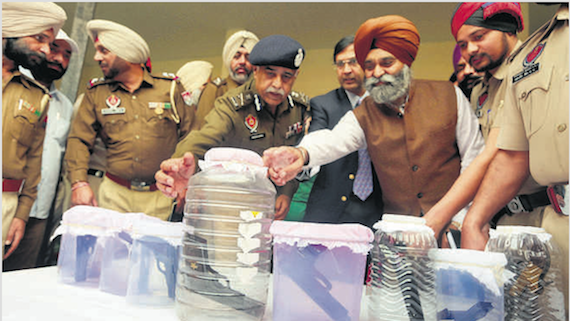 The DGP and other officials look at seized weapons in Ludhiana | Photo source: The Tribune

The police further claimed that the arrested person had taken all five weapons used in these cases in his carry bag to the gym. According to the police the bag was laying side by in the gym where Hardeep Singh was exercising on Thursday morning.