London: On Sunday 3 June tens of thousands of Sikhs will gather in central London and remember victims of the 1984 Sikh Genocide.

Sikhs from across the UK will commemorate the 34th anniversary of the June 1984 Indian army attack on the Sri Harmandir Sahib Complex, often referred to as the Darbar Sahib Complex.

Sikhs will gather in Hyde Park between 11am and 1pm. This will be followed by a protest march through central London before holding a massive freedom rally in Trafalgar Square between 2-5pm. 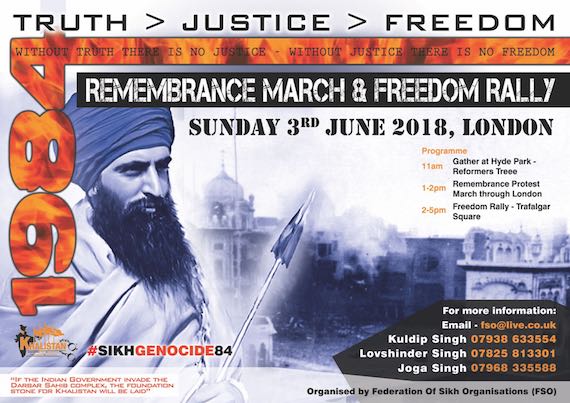 FSO to organize Remembrance March and Freedom Rally in London on June 3, 2018

The theme of the annual event is Truth, Justice and Freedom.

The Sikh Federation UK said in a statement issued today that [i]n the past twelve months relations between the Indian regime and Sikhs in the Diaspora have increasingly become strained. 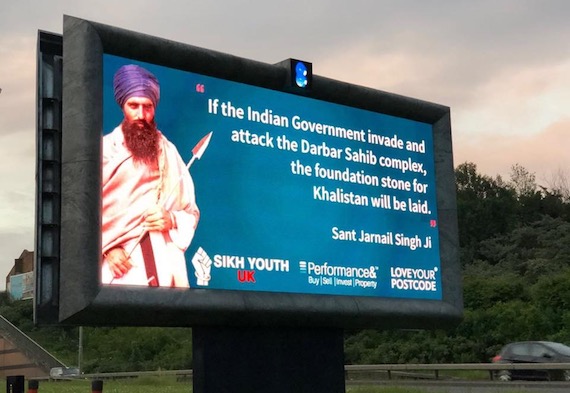 The main cause of this is the extreme right wing Hindu policies of the Indian government and the growing political activism of Sikhs in the Diaspora led by British and Canadian Sikhs, said Sikh Federation UK.

According to the Sikh Federation UK, [i]n the UK the Indian government see a number of campaigns, activities, incidents and events spearheaded Sikh groups as a major threat to its image abroad.

The situation between India and Britain has deteriorated by the over reaction of the Indian authorities. It has been reported in the Indian media that India Ministers have called for a ban of organisations such as the Sikh Federation (UK), ludicrous legal threats have been made against the UK Government for failing to take action against anti-Modi protesters who tore down the Indian flag in Parliament Square and ridicule of the Labour Party leadership for supporting Sikhs on many of these issues.

Speakers in Trafalgar Square are expected to include, the two Sikh MPs – Preet Kaur Gill and Tanmanjeet Singh Dhesi as well as Gurpreet Singh Johal the elder brother of Jagtar Singh Johal. Bobby Singh the co-founder of Love Your Postcode who has in the last 48-hours given unprecedented support for the event with hundreds of massive digital images that have highlighted the most prominent in June 1984 who were martyred is also expected to address those gathered in Trafalgar Square. See images attached.