The Great Leap of Faith: A Sikh Initiation Rite

Sikhs have a straightforward, but still very inspirational and practical initiation rite. The only problem is that in recent times, we seem to have forgotten its importance.

An American friend of mine recently explored the rite of initiation to our living Guru, Sri Guru Granth Sahib, and felt disturbed that we seem to have pushed it to the backseat. She rightfully felt that, whereas most world religions promote the fact that their youth go through one or more rites of commitment to their faith, we may have forgotten the importance of our own rite, the Gurcharani Lago Diwas. She called it an age-old tradition, a Leap of Faith.

All rites of commitment have a reason, the reason being that every adherent avails the opportunity to publicly commit oneself to a spiritual mentor and set life goals consistent with that commitment. Further, the aspirant prepares for the day of commitment with a forward outlook and the community buys into the preparation by investing in their youth’s preparation. 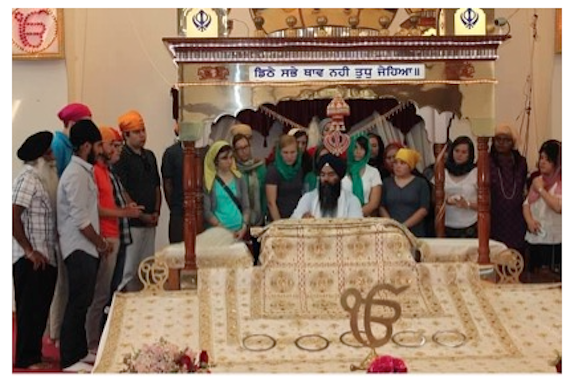 Fortunately, it was not too long ago that such a Leap of Faith custom was a prevalent part of our community. It required that a growing youth be taken to a local Gurdwara where lessons were provided on reading the Gurmukhi script and becoming proficient to a level when the youth began to read and recite Sri Guru Granth Sahib.

When the youth is considered ready, a special event is scheduled to ceremoniously perform the first reading of Sri Guru Granth Sahib in public. The community is invited to the local Gurdwara. A joyful ceremony is arranged similar to celebrating a birthday or another important event in the life of a growing youth.

The Bhai Sahib conducts ceremonial kirtan and recitations, and then introduces the aspirant Sikh (student) to the congregation. A special prayer is recited. The parents of the youth and members of the congregation join in prayer to seek the Guru’s Hand of Grace for the newly initiated Sikh, and for the Guru’s light to gleam on the aspirant’s mind.

The prayer also includes a pledge from the new aspirant to diligently surrender and lie down at the feet of Guru for the rest of his/her life by continually and diligently reading the Granth on periodic basis. Then the friends and relatives congratulate the youth and join with the parents in the celebrations. Festively prepared langer, and often gifts of Indian sweets, are prepared. 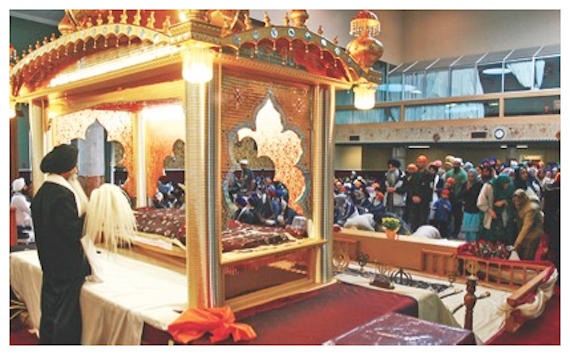 The occasion is called Gurcharani Lago Diwas, meaning the day the youth committed to the Guru’s feet. Mine was celebrated when I was 10 years old. Others in my town did so at various ages when they were still teenagers. Until then I read Gurbani only from small books and Gutakas. Only when the granthi sahib was satisfied that I could read the Guru Granth, did she give me permission to participate.

My Leap of Faith Ceremony

My neighbourhood Gurdwara was Istari Sat Sang Sabha meaning the Sikh Women Congregation, in the town of Haripur Hazara, the only town founded by Maharaja Ranjit Singh in the honor of the Sikh general, Hari Singh Nalwa. Young children went with their mothers to the Gurdwara for women. There was another Gurdwara in town for both genders but most women attended the congregation for women in their own Gurdwara.

Two woman Granthis, known popularly as Bhen Narain Ji and Bhen Dhanwanti Ji, managed the Gurdwara for women. They lived there, where they met the community’s spiritual needs. The kirtan performed by the whole congregation was led by them and was followed by liturgical explanations of verses from Sri Guru Granth Sahib done by the cantors. This was followed by readings on Sikh history from the writings of Bhai Vir Singh. The services were conducted daily both in the morning and in the evening just like those I observed recently in district Swat of Pakistan. The total Sikh population of Swat, around forty Sehajdhari Sikh families, attended the local Gurdwara every morning and many did so every evening too.

I was lucky to be in the care of these two very kind women Granthi of the Gurdwara in Haripur. I learnt my Guru Granth teachings and all of my Sikh history from them. I remember others too taking the pledge of the Introduction to the Sri Guru Granth Sahib and those who did so still continue to read Sri Guru Granth Sahib periodically. Those who could not be initiated then still have difficulty in reading the Granth.

When I say reading of the Sri Guru Granth Sahib I actually mean the Guru Granth paath. We Sikhs have a set tradition of doing paath. Ours is a symbolic way but with deep meaning. It is done with both the heart and the mind or as is said in modern science, with the left and the right brains, both our logical and intuitive sides of the brain. In reality we explicitly utilize both logical and intuitive faculties of our mind at the feet of Guru.

First of all we seek and prepare a sacred space to do paath, where we read the words of a passage in the Sri Guru Granth Sahib. Then we learn its literal, symbolic and metaphorical meanings. We combine this with a search into the history and culture of the time when the passage was written and to which our Guru spoke. All of this is done to give us a central idea and logical insight fossilized centuries ago in the verses that we are reading today.

Next, we stop and meditate with mindfulness on the symbols, metaphors and meanings that we read in the passage we are processing. At the same time in our meditation, we pray from the depth of our heart for divine guidance. In prayer we create a space within our consciousness for the real meaning to unfold. Often it does if we are humble in prayer and have achieved stillness of mind.

When it does unfold, we have “Paath Deedar” or “Shabad Deedar” depth, which is based upon the level of the evolution of the reader’s consciousness. A modern idiom may describe it as a metaphysical interpretation but we feel its touch in our heart. Besides, it usually includes a practical lesson for us to use in our lives today and for the days to come.

As you see, the Leap of Faith initiation is not just a ritual. It teaches our youth to do the Gurbani paath which is neither a simple ritual nor a complex scholarly endeavour. The Guru Granth paath is a sacred rite for every Sikh, creating a connection to the Guru for spiritual guidance. To pursue the reading process, intellectual deliberation is required to seek wisdom, while keeping faith in the process is required to receive the inner light. As a seeker we learn to place our faith and trust in the divinity of the Guru and yet to continue to question our own understanding of the Guru’s teachings in order to take full benefit of the process.

Paath certainly is not a ritual and no one else can ever do it on your behalf.

Now that we are in the thick of reasserting our traditions in the West, it will be appropriate to reassert the ritual of the Sikh Leap of Faith. Let children be prepared to communicate with their Guru and rejoice their accomplishment in the encouraging environment of a supportive and enthusiastic public. Let us celebrate this as a more important ceremony than a birthday or the “tying of turban” celebration.

To me this Leap of Faith is what is meant from the clause in the Sikh Rehat Maryada defining a Sikh. It required belief in the teachings of Sri Guru Granth Sahib and the ceremony described above provides a public commitment to that most important pledge of the belief in Sri Guru Granth Sahib. This pledge is necessary to be a Sikh.

ਗੁਰ ਚਰਨ ਲਾਗੇ ਮਹਾ ਭਾਗੇ ਸਦਾ ਅਨਦਿਨੁ ਜਾਗਿਆ ॥ SGGS, p. 691.
Those who commit to the Feet of the Guru, meaning Gurubani Paath, with understanding, are very blessed; night and day, they remain in perpetual awakening and awareness. || SGGS, p. 691.

Sikhs are not required to pursue any rituals. Still we do have to take at least one really big Leap of Faith. This is one incredibly faithful belief that Sikhs must hold. Through this commitment each and every one of us surrenders all spiritual authority to our Eternal Guru, the Sri Guru Granth Sahib. Through our daily paath of Sri Guru Granth Sahib we each go directly to our Guru for our personal marching orders, men and women and children alike. Through this ritual we also affirm that Sikhs everywhere will be united under One Leader and we will act in unified Divine accord, as ONE.

Our public commitment to Sikhee challenges us to revive the Gurcharani Lago Diwas celebration. It will be really a big LEAP.