London: UK based Sikh Federation on Saturday (Nov. 9) released ‘Section 10’ of the Sikh Manifesto 2020-2025. The group has been releasing the the document for past ten days, on one section per day basis. The document seek Right to Self Determination for the Sikhs. It says that the UK Government and MPs must accept the general principle that self-determination is a basic human right that applies to the Sikhs and international law allows for the Sikhs to exercise that right. 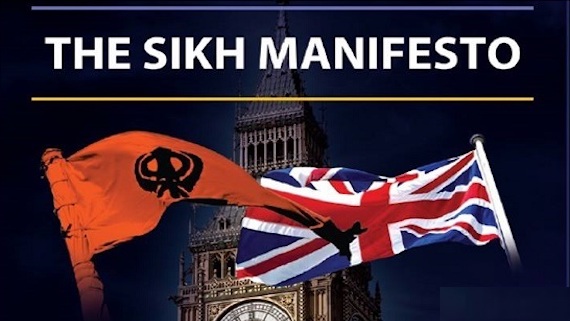 Section 10 – Application of self-determination for the Sikhs

The UK Government and MPs must accept the general principle that self-determination is a basic human right that applies to the Sikhs and international law allows for the Sikhs to exercise that right.  The UK Government must join countries such as France, Germany, the Netherlands and Pakistan to challenge India at the UN to withdraw its ‘reservation’ that self-determination does not apply to the people within India. The ‘reservation’ relies on the territorial integrity argument, which is the principle that nation-states should not attempt to promote secessionist movements or to promote border changes in other nation-states. The UK Government has a historic and moral responsibility to make the case that given India’s widespread human rights violations on minority groups, the territorial integrity argument should cease to apply.  It must also accept its responsibility towards resolving the conflict Sikhs have in the Indian sub-continent given direct British responsibility over the 1947 Partition and drawing a line through the Sikh homeland.

Principle of self-determination and its applicability to Sikhs

The UK Government and MPs must accept the general principle that self-determination is a basic human right and it applies to the Sikhs.  There is a need to acknowledge the Anglo-Sikh friendship treaties, admiration and appreciation of the Sikhs loyalty, huge contribution and sacrifices in the World Wars.  In addition, the UK Government presided over discussions prior to the creation of India and Pakistan in 1947, which included the specific offer of a separate Sikh homeland and a ten-year agreement of military assistance and support for the Sikh administration.

The UK Government has a historic and moral responsibility towards the Sikhs to help, through diplomatic means, resolve a conflict that continues. Whilst not committing itself to any outcome, the UK Government should acknowledge the international law which allows for the Sikhs to exercise the right to self-determination.  Self-determination is a contested concept and its relevance and application in a particular context has always been the outcome of political processes. Thus, its assertion as a claimable right is of legal signiﬁcance. However, demands for its application remain in the political realm.

India must withdraw its reservation against the right to self-determination

The UK Government must join other countries and challenge India at the UN Human Rights Committee to withdraw its ‘reservation’ that self-determination does not apply to the people of India. It has lost the right to rely on the territorial integrity argument by oppressing people within its territory, including the minority Sikh community and has failed to respect the political and human rights of the Sikhs.

Acceptance of the general principle – Self-determination is a basic human right founded in international law on which other human rights depend. The UN Human Rights Committee has stressed that the right of self-determination is fundamental to the protection of individual rights. All nations belonging to the UN are obliged to respect this right.

Sikhs satisfy the definition of a people or a nation – The Sikhs, with a unique spiritual and temporal philosophy (the Miri-Piri principle), together with a distinct linguistic and cultural tradition, developed into an indigenous, freedom loving sovereign nation that first secured political power in the form of an independent state in 1710 CE. The larger sovereign Sikh state established in 1799 CE was recognised by all world powers as a subject of international law and was party to several Treaties with the British. As well as being recognised as a people or a nation by others, the Sikhs crucially in the context of the criterion of self-identification see themselves as such. Whilst the Sikhs are clear about their nationhood, they find that it is denied by the Indian state.

Subsequently, the UN Human Rights Committee has stated in its review of India’s compliance with Article 1, which deals with self-determination, that it ‘invites the State party [India] to review these ‘reservations’ and declarations with a view to withdrawing them, to ensure progress in the implementation of the rights . . .’ India has not made any such withdrawal. India’s position is contrary to the law of self-determination. Whilst India may have an expedient interpretation of the law to suit its own needs, it is nevertheless bound by international law and the international community must insist that the law is upheld.

India has lost the territorial integrity argument by oppressing peoples within its territory – A part of the general limitation on the right of self-determination is the specific limitation of territorial integrity. The 1970 Declaration of Principles of International Law provides that the right of self-determination shall not ‘be construed as authorising or encouraging any action which would dismember or impair, totally or in part, the territorial integrity or political unity of sovereign and independent States’. This limitation is an extension of the desire in most societies to create a social and legal system which is relatively stable.

However, the territorial integrity limitation cannot be asserted in all situations. The Declaration of Principles of International Law provides that only ‘States conducting themselves in compliance with the principle of equal rights and self-determination of people’ can rely on this limitation.

The ‘territorial integrity’ objection to groups seeking to exercise self-determination by means of secession is only arguable if a state has not oppressed the peoples living within it and where those peoples have had their political and human rights respected in the constitutional set-up in that state. The level of oppression of the Sikhs in Punjab and elsewhere in India (especially during the period 1984 to 1995) has been severe. The systematic violations of “individual” human rights such as genocide and other crimes against humanity, such as extra-judicial killings, disappearances, torture, rape and illegal detention has left Sikhs traumatised. Observers of the Sikh situation will be aware that the ‘territorial integrity’ objection cannot be afforded to India.

Britain’s historic and moral responsibility towards the Sikhs  – The Anglo-Sikh relationship has existed for over 200 years and based on a number of friendship treaties. The British rulers of India studied the Sikh religious history and their proud military tradition, which won the respect of the British military commanders, politicians and scholars alike. Hundreds of thousands of Sikhs answered the call of Britain and the Allies in both World Wars with over 83,000 turban-wearing Sikhs sacrificing their lives, with over 109,000 wounded.

The Sikhs played a leading role in the struggle for independence from the British. They made sacrifices wholly out of proportion to their demographic strength (the Sikhs made up less than 2% of the Indian population). Out of 2,125 killed, 1,550 (73%) were Sikhs, out of 2,646 deported for life to the Andaman Islands, 2,147 (80%) were Sikhs and out of 127 sent to the gallows, 92 (80%) were Sikhs. The Sikhs were therefore the third party with whom the British negotiated for the transfer of power and offered a separate Sikh homeland and a ten-year agreement of military assistance and support for the Sikh administration.

The Sikh leadership at the time accepted promises and solemn assurances made by the leaders of India, but the latter reneged on these promises. When India adopted its first Constitution and was declared a Republic on 26 January 1950 Sikhs refused to sign, accept or endorse the Constitution, contending it did not have any legal safeguards for the culture, language and religion of the Sikhs.

Internal v External self-determination – The right of self-determination can take a variety of forms, from autonomy over most policies and laws in a region or part of a state; to a people having exclusive control over only certain aspects of policy; such as education, social and/or cultural matters. The type of arrangements applicable to any given situation will usually depend on the constitutional order of the state concerned.

The Sikhs have, since 1947, made substantial efforts aimed at securing ‘internal self-determination’ within India. That is a matter which has been recorded in a great deal of literature. The Sikh demands for autonomy or internal self-determination were not only rejected by the Indian state; Indian politicians responded by criminalising Sikh aspirations and trying to neutralise them by using force (state terrorism), eventually on a massive scale. India incorrectly labels self-determination activists as extremists.

The classic mechanism for implementing the right to self-determination is the use of a plebiscite. This was seen in the original UN resolutions on Kashmir in 1948 and the more recent UN-led independence process for East Timor or the referendum in Scotland. The Sikhs have not, of course,  been offered the opportunity, but it is interesting to note that the former UK Indian High Commissioner, Kuldeep Nayar has admitted that if, after the horrors of 1984, the Sikhs were given a plebiscite they would have gone for an independent state.