November 1, 2018 | By Organisation for Minorities of India (OFMI)

by: Organisation for Minorities of India – OFMI

Some minorities of Indian origin are asking for Dinesh Bhatia, the Consul General of India’s Toronto consulate, to resign after he appeared as the keynote speaker at an Oct. 19 event which was hosted by Hindu Swayamsevak Sangh (HSS), the international wing of Rashtriya Swayamsevak Sangh (RSS), the world’s largest paramilitary.

“Thousands of Indians fled religious and ethnic persecution in India to find refuge in Canada,” says Ram Mohan, an activist with Canadian Minorities of India (CMI). “Many refugees, including Christians, Dalits, Muslims, and Sikhs have endured persecution at the hands of the RSS. The moment Consul General Bhatia spoke on a stage featuring photographs of RSS leaders, he discarded his diplomatic credentials. Bhatia’s presence at an RSS event inspires fear in the hearts of many Canadians from Indian minority communities. He must resign.” 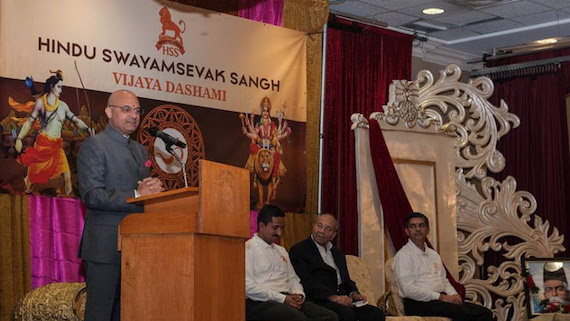 Bhatia was joined at the event by Ved Nanda, Sanghchalak (Leader) of HSS North America, and Saumitra Gokhale, International Coordinator of HSS. Garlanded photos on the stage included K.B. Hedgewar and M.S. Golwalkar. Hedgewar, who founded the RSS in 1925, said his intention was “to put in reality the words ‘Hindustan of Hindus.’” He stated, “Hindustan is a country of Hindus. Like other nations of other people (eg. Germany of Germans), this is a nation of Hindu people.” Golwalkar, who was the RSS’s longest-serving leader, stated, “We repeat: in Hindustan, the land of the Hindus, lives and should live the Hindu Nation.”

“The RSS calls Indian Christians ‘foreigners’ and murders them,” says Bill Rogers, a U.S.-based observer of international Christian persecution. “One horrible example is the 2008 Odisha Pogrom, where the government of Odisha is on record saying that it was the RSS and its affiliates who massacred dozens of Christians and made so many tens of thousands refugees in their own country. A diplomat who claims to represent a secular country has no business going anywhere near an RSS event.”

The RSS is the parent of a family of organizations known as the Sangh Parivar. According to the U.S. Commission on International Religious Freedom, “Sangh Parivar entities aggressively press for governmental policies to promote their Hindu nationalist agenda, and adhere in varying degrees to an ideology of Hindutva, which holds non-Hindus as foreign to India.” In June 2018, the CIA labeled the RSS as a nationalist organization and its affiliate, the Vishwa Hindu Parishad (VHP), as a religious militant organization.

“The RSS, VHP, and HSS are supremacist groups which spread hatred against non-Hindu Indians,” explains Pieter Friedrich, an analyst of South Asian affairs. “The RSS and VHP are implicated in pogroms against Indian minorities, assassinations of journalists, and terrorist acts. They share ideological affinity with white nationalists. White nationalists want a whites-only nation while the RSS wants a Hindus-only nation. Both are anti-Semitic. Both glorify Aryanism. Both lynch minorities. Horrifying events like the Tree of Life Synagogue massacre in Pittsburgh are regularly replicated in India by Hindu nationalists who invade churches, mosques, and gurdwaras.”

Friedrich notes, “The goals of the RSS are very clearly indicated in the writings of Golwalkar and of Savarkar — the originator of the term Hindutva. Both suggested that Indian minorities should be treated the same way as Nazi Germany treated the Jews.” He identifies a selection of quotes from both figures taken from the 1920s to 1960s.

“We are Indians because we are Hindus and vice versa,” wrote Savarkar. He said that, “India must be a Hindu land, reserved for the Hindus.” Asserting that “so far as the Moslem minority is concerned… we must watch it in all its actions with the greatest distrust possible,” he concluded, “If we Hindus in India grow stronger, in time these Muslims… will have to play the part of German-Jews.”

“Conversion of Hindus into other religions is nothing but making them succumb to divided loyalty in place of having undivided and absolute loyalty to the nation,” wrote Golwalkar. He demanded, “Muslims and Christians here should give up their present foreign mental complexion and merge in the common stream of our national life.” Claiming that “the first Semitic religion was Judaism — an intolerant faith,” Golwalkar declared,

Bhatia courted controversy earlier this year when his office protested the presence of a Punjab pavilion at the July 2018 Carabram multicultural festival in Brampton, Ontario.

According to Brampton Mayor Linda Jeffrey, consular officials threatened to “go to the highest office in the country and cancel this festival.” Their objection was that the Sikh community wanted to host a Punjab pavilion apart from the India pavilion. “This type of unwarranted interference by Indian officials in a local cultural festival in Brampton was shocking,” said Jeffrey. The office of Foreign Affairs Minister Chrystia Freeland stated, “Interference in domestic affairs by foreign representatives in Canada is inappropriate.”

Meanwhile, RSS Sarsanghchalak (Supreme Leader) Mohan Bhagwat and HSS Sanghchalak Ved Nanda have both sparked protests in the U.S. over the past year.

Representative Tulsi Gabbard, the first Hindu elected to U.S. Congress, was confirmed to chair the WHC but dropped out after protests against her sharing the stage with Bhagwat. She stated, “Due to ethical concerns and problems that surround my participating in any partisan Indian political event in America, effective immediately, I respectfully withdraw myself.” Ram Villivalam, a nominee for Illinois State Senate, was scheduled to appear but also dropped out. Citing the presence of “nationalist individuals and organizations affiliated with WHC 2018,” he stated, “Therefore, I cannot participate in this convening…. I do not support any group and/or an event arranged or led by organizations that intimidate minorities, incite discrimination and violence, commit acts of terror based on race or ethnic background, promote hate speech, and/or believe in faith based nationalism.”

In November 2017, Nanda stirred controversy in California when the Uberoi Foundation for Religious Studies, an organization he chairs, sponsored demands to revise school curriculum. A broad spectrum of Indian minority groups — including Dalits, Muslims, Sikhs, and Ravidassias — protested proposed revisions which included removal of the word “Dalit,” insertion of language claiming that the caste system created “social stability,” insertion of language suggesting that Dalits (formerly known as Untouchables) chose to do “dirty work” which made them untouchable, insertion of references to the mythical Saraswati River as a geographical reality, removal of references to Sikh Guru Nanak’s opposition to Brahmanism (the philosophy holding the highest caste, Brahmans, as superior) and the caste system, and labeling of U.S. Congressman Dalip Singh Saund as an Indian instead of a Sikh.

“Nanda directly modeled his efforts to revise American curriculum after efforts by Bhagwat and his predecessors to rewrite Indian curriculum according to the whims of Hindu nationalists,” notes Arvin Valmuci, a spokesperson for Organization for Minorities of India (OFMI). “We have seen solidarity among diverse communities protesting the California curriculum changes as well as the WHC in Chicago. Indians in Canada, including freedom-loving Hindus, should also unite, speak out, expose, reject, and eject Consul General Dinesh Bhatia’s affiliation with the agenda of militant religious nationalism.”