Turlock (California): The month of November is observed as Sikh awareness month by various City councils in the United States of America. Following the suit the Turlock City Council recognised the city’s diversity on Tuesday, while proclaiming November as Sikh Awareness and Appreciation Month.

The proclamation recognises the contributions Sikh Americans have made throughout the country and in California, where an estimated 250,000 Americans of Sikh origin call home.

“Today, the City of Turlock seeks to further the diversity of its community and afford all residents the opportunity to better understand, recognize and appreciate the rich history and shared experiences of Sikh Americans,” reads the quote from the reported proclamation. 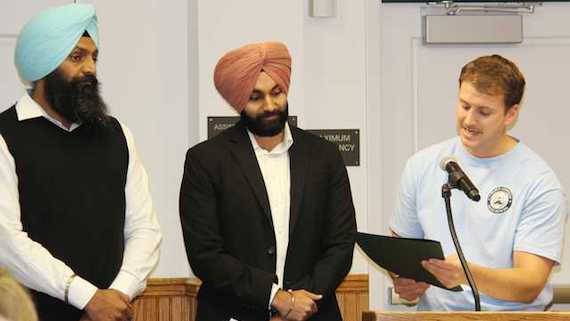 Jaydeep Singh, advocate for the Sikh Coalition, was one of three Turlockers to accept the proclamation. Below are some excerpts of the speech Jaydeep Singh gave to the Council:

“…Thank you for recognizing the contributions of the thousands of Sikhs who have called Turlock home for over 70 years now.

“Sikhs, like those pioneers before them, came to this country with little more than the turbans on their heads and an unshakable resolve in their hearts.

“But the journey has not always been easy.  The Sikh story in America would not be complete without telling the unfortunate stories of discrimination, bigotry and violence.

“However, despite the adversity. Despite the mountains we have had to climb. We endured. Ladies and gentlemen, that is what we do as a people – we persist.

“In the Sikh tradition, there is a concept, called “Sarbat Da Bhalla,” which roughly translates to “blessings for everyone,” irrespective of color, caste, creed or gender.