Bathinda: Gurbir Singh alias Mundi Sidhana is cousin brother of Lakhbir Singh alias Lakha Sidhiana. He could barely walk now, that too with the help of two persons. He was allegedly picked up by Delhi police from Patiala and was tortured badly in illegal police custody.

Baba Hardeep Singh Mehraj, a social activist and close associate of Lakha Sidhana told Sikh Siyasat News (SSN) that Mundi Sidhana was picked up by Delhi police from Patiala on 8th of April. He was administered third degree torture by police while he was in its custody. 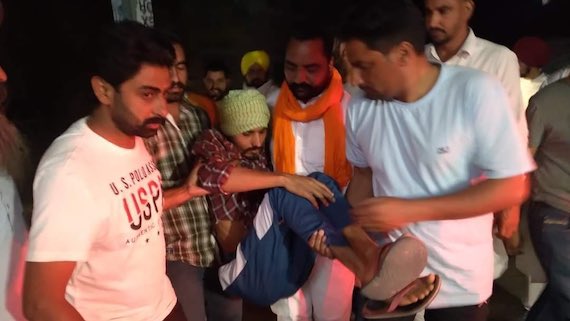 “Mundi Sidhana is in his twenties and studies at Punjabi University in Patiala. Delhi police tortured in police custody so badly that he could barely walk now. After his condition deteriorated due to excessive torture, police released him on the evening of April 9”, Baba Hardeep Singh told Sikh Siyasat News (SSN) over phone.

“Police was asking Mundi Sidhana to tell them about whereabouts of Lakha Sidhana”, he added.

“Police was asking him (Mundi Sidhana) that he was uploading videos of Lakha (Sidhana) to Facebook as Lakha is underground”, said Baba Hardeep Singh.

He said that Mundi Sidhana remains hospitalized at Bathinda.

It is notable that Delhi police have declared Rs. 1 lakh bounty for arrest of Lakha Sidhana after naming in a case registered in relation to 26 January Kisan Parade incidents. Lakha Sidhana, who remains underground since then, has now announced to openly participate in ongoing farmers protests. On 9th of April, Lakha Sidhana led a march of youth from Mastuana in Sangrur district of Punjab to Singhu border to ensure participation of youth for success of Sanyukt Kisan Morcha’s call to block KMP Road for 24 hours on 10th of April.