Hoshiarpur:  Remembering its founder leader Gajinder Singh in his absence on his 66th birth anniversary, the Dal Khalsa wants UN to give refugee status to its patron since, in international parlance, he is a stateless person.

Notably, Gajinder Singh along with his colleagues hijacked the Indian plane on 29th Sep 1981 and is living in self-exile at some undisclosed country.

“It is ironic that he has to spend his life in oblivion despite the hard fact that he has undergone the life imprisonment for hijacking”, said party’s senior leaders H S Dhami and Kanwar Pal Singh. 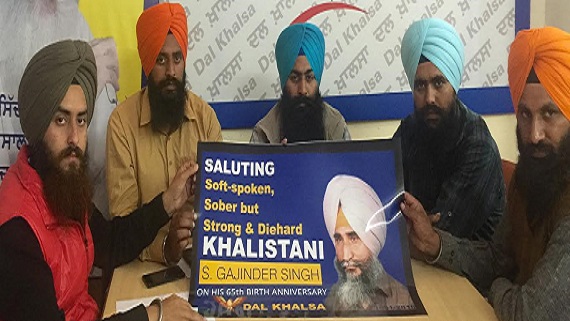 In a statement, they didn’t mention as to where he was based now. However, he said Bhai Gajinder Singh remains the patron of the Dal Khalsa, which unfailingly continues to uphold the spirit of the ‘mission for independence’ started by him.

Sources believe that Bhai Gajinder Singh has settled in Pakistan after his release from jail in Nov 1994.

The leaders said the case of Bhai Sahib is fit for the refugee status as he is a person who cannot live in his homeland as despite having undergone long imprisonment for hijacking and despite the fact that he is entitled to the legal defense of not to be tried for the same offence twice under the notion of ‘double jeopardy’.

“Earlier, we were reluctant to write to world body but now we have decided to approach UNHCR (The UN Refugee agency) to get the status for him”.

While critising the Indian establishment, they wondered if India can give asylum to Tibetan leader Dalai Lama and has initiated process to give the same to Pak’s  Baluchistan leader Brahumdagh Bugti presently living in Switzerland, why New Delhi has been creating diplomatic obstacles to Bhai  Gajinder Singh’s settlement in any country of his choice.

To drive their point home, they alleged that India thwarted Gajinder’s effort to settle down in Germany in July 1996 and it did the same again in late 90’s in UK. “The then govt shot off a letter to our local party office informing that Gajinder Singh won’t be given asylum if he enters UK.  The decision was unilateral as Gajinder never applied for asylum there. Although it’s altogether a different matter that UK has granted asylum to Pakistan’s rebel and MQM chief Altaf Hussain.

They further said in 2001, India placed his name in the most wanted list, however his name has not been mentioned in the latest list of India’s most wanted.  Continue with its witch hunting attitude, Indian government allowed the re-opening of the hijacking case after 36 years and currently two of the members of hijacking team who have returned to India were facing the sedition charges afresh at Patiala House, Delhi and next date of hearing is Nov 21.

Let’s be clear, said they and added that he wasn’t involved in any terror case other than the 1981 hijacking one to which he has already undergone life sentence in Pakistan.