NEW YORK: United Sikhs, in partnership with the NYC Dept. of Education, has announced a new Sikh-focused lesson plans for elementary and middle school students. The lesson plans are entitled Creating Political Cartoons: Civil Rights in the USA and The Teachings of Sikhism, and support 5th and 6th graders in learning about the lives of Sikh Americans through U.S. civil rights and world religions.

“Sikh children are bullied at more than double the country wide rate,” said Dr. Gurparkash Singh, United Sikhs National Director of Community Empowerment, Education and Development. “With the new lesson plans, we hope to improve overall awareness about the Sikh community at a critical time in childhood development – the early middle school years. We are proud to partner in this effort in New York, the most diverse city in the world, and thank the Mayor’s Community Affairs Unit and Department of Education for embracing our community in NYC public schools.” 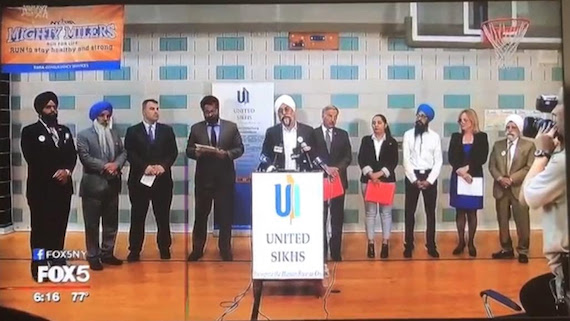 “As we work to strengthen instruction across our schools, it’s important to provide students with a rich understanding of multiple cultures and communities,” said Phil Weinberg, Deputy Chief Academic Officer for the DOE. “I thank United Sikhs for their collaboration, input, and feedback in developing these lesson plans in the DOE’s Passport to Social Studies.”

“The Community Affairs Unit is committed to forging strong partnerships between New York City’s multiethnic communities and our City agencies,” said Commissioner Marco A. Carrion. “I commend DOE for introducing a formal curriculum on Sikhism that will better prepare students starting next school year with the critical thinking skills necessary to engage across cultures in our very diverse City.”

“Sikh Americans — from Bhagat Singh Thind, who beginning in 1920 fought for the right of South Asian Americans to gain citizenship, to Simritpal Singh who gained permission to wear his Turban and Beard while serving as a Captain in our nation’s Army – have been on the forefront of American History for generations. Which is why it’s so critical to ensure that the history if Sikh Americans and the values brought to our country through Sikkism are a part of our schools’ curriculum, especially in New York” said Assemblyman David I. Weprin. “I’d like to applaud the Department of Education, Mayor’s Community Affair Unit, NYC Commission on Human Rights, and United Sikhs for reaching this significant milestone for diversity in New York City and thank them once again for their continued work to make New York a more inclusive city.”

United Sikhs worked with New York City because it is the largest school district in United States, enrolling 1.1 million students each year. The organization supported the NYC DOE in developing a 5th grade lesson on U.S. Civil Rights through the lens of Sikh Americans, and a 6th grade lesson on Sikh teachings as part of a larger Comparative Religions education unit.

For the 5th-grade lesson, local cartoonist Vishavjit Singh, better known as “Sikh Captain America” and the artist behind Sikhtoons.com, provided a political cartoon including thought-provoking news headlines and comic strips of “turban and beard-armed men freely roaming the streets of New York.” The lesson encourages students to consider common civil rights violations Sikhs and other groups experience and draw their own illustration related to U.S. Civil Rights and current events.

“It took an amazing effort to get curriculum updated in the largest school district in the nation to include lessons about a group of the American family which has been here for over 125 years, the Sikhs,” said Vishavjit Singh, United Sikhs Board Director. “What makes it even more special is to have Civil Rights lessons created incorporating the art of cartooning to highlight examples of myriad of groups facing challenges today, including Sikhs.”

For the 6th grade lesson, which is called The Teachings of Sikhism and part of a larger unit on religions around the world, United Sikhs Staff Attorney Jaspreet Kaur met with the DOE’s Social Studies team and supported the development of a lesson plan that provides a detailed history of the religion and insight into the everyday lives of Sikhs.

“This is a ground-breaking announcement, as it is the first time that young New Yorkers will have an opportunity to read and learn about Sikh history,” said Jaspreet Kaur, United Sikhs Legal Director. “This is a great first step towards identifying and addressing Sikh civil rights as a movement. It was an honor to help lead the effort on this historic milestone for the global Sikh community.”