Connecticut: It is learnt that the US Attorney Deirdre Daly here on Wednesday chose three Sikhs from Connecticut for her annual ‘Community Partnership Award’ 2017.

The award is given to those individuals in the community who contribute to the mission of the Department of Justice. 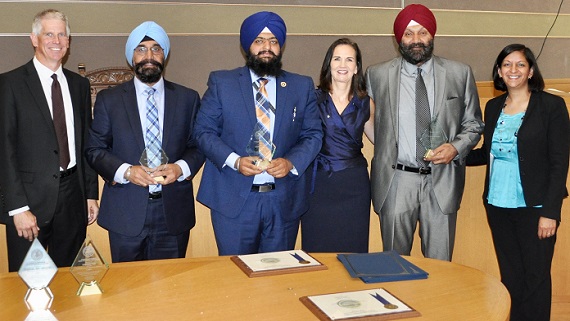 Swaranjit Singh Third From left after being Awarded.

As per the press release available Swaranjit Singh Khalsa President Sikh Sewak Society International USA and Member Norwich Commission of City Plan is one of the Sikh nominated for this award due to his outstanding service to Connecticut law enforcement by providing them cultural competency training over period of last 7 years.

In March Connecticut’s U.S. Attorney Deirdre M. Daly and the other 45 top federal prosecutor appointed by former President  Barack Obama who are still in office were asked for their resignations by U.S. Attorney General Jeff Sessions but she was allowed to un-retire for six more months so she can become vested in a federal employee retirement program, reads a quote from a press note issued by Swaranjit Singh.

The award distributing ceremony was reportedly held in the Aldermanic Chambers at New Haven City Hall on Wednesday, June 14, from 10 am to 12 pm. Amarjit Singh from Norwalk and Maninder Singh Arora Member Southington Sikh Gurdwara were other two Sikhs who have been awarded with this award due to commitment towards Sikh Awareness activities.

In his address to the audience present Swaranjit Singh Khalsa reportedly said “I want to thank our former President Obama for his leadership and all the his appointees who have recognized me and other people all over United States. These are be people who volunteer themselves and worked during his term to promoted religious tolerance and worked on how to make our cities safe.”

” I hope Trump Administration will also follow these footprints and keep the Recognition process rolling to boost the volunteers for their community work”, he further added.

Furthermore, Sarala V. Nagala Assistant U.S. Attorney of Connecticut also congratulated them personally and said you all are well-deserved candidates for this achievement.

On this ceremony many of FBI agents,Police officer,State troopers and many other Investigators who were helpful in solving cases related to US security were present.