Londonderry, NH (OMFI): Answering a question at a recent campaign event in New Hampshire, US Congresswoman and presidential candidate Tulsi Gabbard appeared to justify a 2002 pogrom against Indian Muslims in which Prime Minister Narendra Modi is accused of complicity.

“Modi, of course, back in 2002, was the Chief Minister of Gujarat, and many consider him to be complicit in the deadly ’02 Gujarat riots,” an audience member said to Gabbard during an Oct. 1 town hall in Londonderry, NH. Gabbard responded, “Do you know what instigated those riots?” 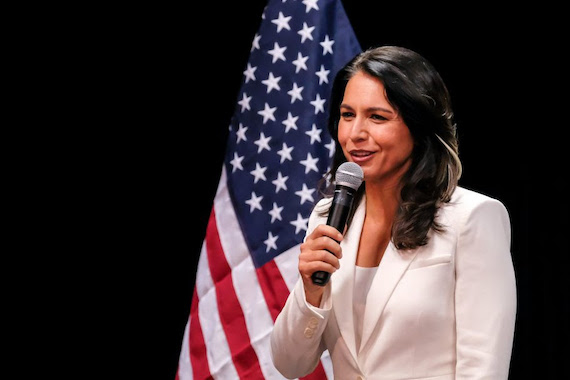 “Congresswoman Gabbard’s justification of the 2002 Gujarat Pogrom is the most abominable form of victim-blaming,” remarks Arvin Valmuci, a spokesperson for Organization for Minorities of India. “With cold and emotionless calculation, she excuses the worst state-sponsored atrocity in modern Indian history by suggesting the thousands who died somehow deserved it. Gabbard’s response trumps the sociopathic attitude of Modi, who says the only sorrow he feels for victims is same as if a puppy were run over by a car.”

In 2013, when asked if he regretted the incidents of 2002, Modi notoriously responded, “[If] someone else is driving a car and we’re sitting behind, even then if a puppy comes under the wheel, will it be painful or not? Of course it is…. If something bad happens anywhere, it is natural to be sad.”

Although the violence lasted for several months, the most intense period was a three-day pogrom from February 28 to March 2, 2002. At least 12 Gujarati cities suffered large-scale attacks. In April 2002, Human Rights Watch stated, “What happened in Gujarat was not a spontaneous uprising, it was a carefully orchestrated attack against Muslims. The attacks were planned in advance and organized with extensive participation of the police and state government officials.”

HRW further reported, “The attacks on Muslims are part of a concerted campaign of Hindu nationalist organizations to promote and exploit communal tensions to further the BJP’s political rule — a movement that is supported at the local level by militant groups that operate with impunity and under the patronage of the state. The groups most directly responsible for violence against Muslims in Gujarat include the Vishwa Hindu Parishad, the Bajrang Dal, the ruling BJP, and the umbrella organization Rashtriya Swayamsevak Sangh (National Volunteer Corps, RSS).” 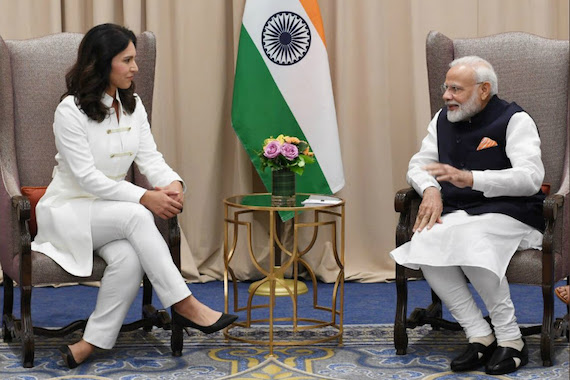 According to Amnesty International, “Some 2,000 people, mostly Muslims, were killed and many others were injured.” The death count is corroborated by many other organizations. Dr. Christophe Jaffrelot, a specialist in South Asian history and politics, states, “According to reliable NGOs, more than 2,000 people died.” Attackers included BJP leaders and elected officials such as Member of the Legislative Assembly Maya Kodnani.

The pogrom was preceded by the February 27 burning of several train-coaches in Godhra, Gujarat. Fifty-nine Hindus, including 37 women and children, died. Modi announced the fire was a “preplanned inhuman collective violent act of terrorism.” Jaffrelot states, “Modi thus used Godhra as an opportunity to unleash violence that he hoped to capitalize on during early elections.”

Modi’s role in the 2002 pogrom prompted the US State Department to deny him a visa to enter the country. In 2005, then US Ambassador to India David Mulford said the decision was “based on the fact that, as head of the State government in Gujarat between February 2002 and May 2002, he was responsible for the performance of state institutions.” Mulford cited reports from the US Government and India’s National Human Rights Commission which alleged a “comprehensive failure” of Modi’s government in Gujarat to stop the “persistent violation of rights of life, liberty, equality, and dignity of the people of the state.”

Gabbard’s perceived justification of the pogrom has sparked a harsh response across social media.

Pieter Friedrich, an analyst of South Asian affairs who has written about Gabbard’s connections to Hindu nationalist groups, enquired, “Can you imagine someone saying that about Kristallnacht, the first Nazi pogrom against the Jews?” His question referenced the 1938 assassination of a German diplomat by a Jewish teenager, which was used as a pretext for Kristallnacht.

“She suggests there’s a justifiable reason for why Hindu extremists murdered upwards of 2,000 Muslims and raped thousands more in 2002,” claimed writer CJ Werleman. He added, “Tulsi Gabbard’s hatred of Muslims is literally hiding in plain sight.”

Werleman recently reported on leaked audio recordings of Gabbard’s guru, Chris Butler, “describing Muslims in the most viciously racist ways.” Butler, who founded the Science of Identity Foundation in which Gabbard was raised, reportedly states, “I’m not in a mood to be tolerant towards so-called Muslims.” He describes Muslims as “demons” and “invaders,” stating, “Everyone is afraid of them.”

Gabbard has faced strong criticism for her association with Butler as well as her alleged support for Modi. Last month, OFMI reported that an anonymous source in her campaign confirmed that the US congresswoman had refused an invitation to join Modi’s September 22 pep rally in Houston, Texas. Gabbard called the report “misinformed” and claimed she only dropped out of the “Howdy Modi” event due to a scheduling conflict. On September 27, she met Modi in New York City, where she says they discussed issues such as “the situation in Kashmir” and “civil rights.” In a statement after the meeting, she said, “There is no place for hate, bigotry, ignorance and prejudice.”

“What about the money that you get from the RSS,” asked the anonymous audience member at Gabbard’s NH town hall. “Back it up,” responded Gabbard. “If you’re going to make these arguments and make these claims, you better have the evidence to back it up.”

“Evidence for claims regarding RSS support for Congresswoman Gabbard was provided in a lengthy article in August issue of Caravan magazine,“ concludes OFMI’s Valmuci. “Gabbard must clarify her position on the RSS. Does she support the RSS’s agenda of ethnic cleansing and turning India into a Hindu nation? If she is against hate and bigotry, how can she be for the RSS?” He adds, “The young woman who posed these questions at Gabbard’s recent town hall has not been identified. We ask her to reach out to us. We would like to interview her to learn about her background and her interest in these issues. Who is she?”