California: As per the media reports emanating from the United States of America (USA) a float depicting Sikh tradition of ‘Langar Sewa’ (community kitchen) will form the part of upcoming Rose Parade on New Year’s Day in South California. 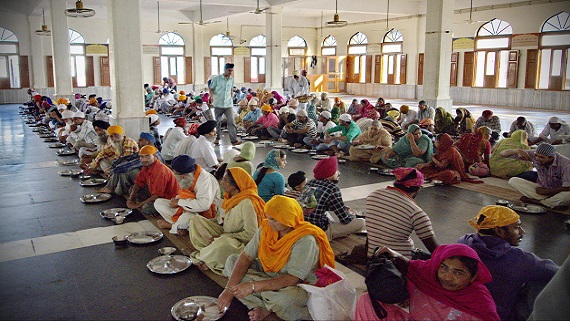 Langer is an important aspect of Sikhi.

Formally called the ‘Tournament of Roses’, the parade is a 129-year-old American tradition that attracts up to one million visitors and is broadcast live across the US.

The float would visually transport spectators back to Punjab, a US based Sikh rights group said while interacting with the media.

Utilising 90,959 flowers and 500 pounds of vegetables, the float will symbolise the meals that can be expected in a langar hall. It will also showcase beautiful brick walls, a marbled dome roof and scalloped arches to replicate those found at the Darbar Sahib.

“Growing up in California, it was always a dream to see a Sikh float in the Tournament of Roses Parade,” BaljBhajneet Singh, a member of the Sikh committee responsible for the float entry for the fourth consecutive year reportedly said.

“The theme of langar really speaks the values of Sikhism and the work that we are doing to help our communities every day here in California and across the world,” he adds.

The Southern California Sikh community feeds thousands of people across the greater Los Angeles every month, reads a quote from a report published in The Tribune (TT).

“From the Khalsa Food Pantry every Friday evening to the monthly barbeques and visits to Skid Row, we are constantly trying to bring langar to those most in need.”

According to Singh, the Rose Parade will be an opportunity for millions of Americans to learn more about langar—-an important aspect of Sikhi.