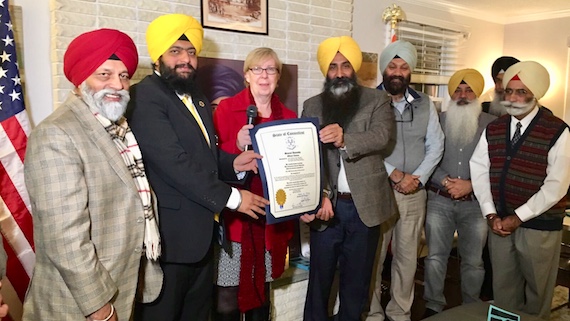 On this event many high profile political figures came to pay their homage to People who were killed by Indian Gov’t. In 1984 and to show their solidarity with Sikh Nation.

During the Commemoration State Senator “Cathy Osten” presented Sikh Leaders Recognition from General Assembly which declares the violence of 1984 as “1984 Sikh Genocide”. 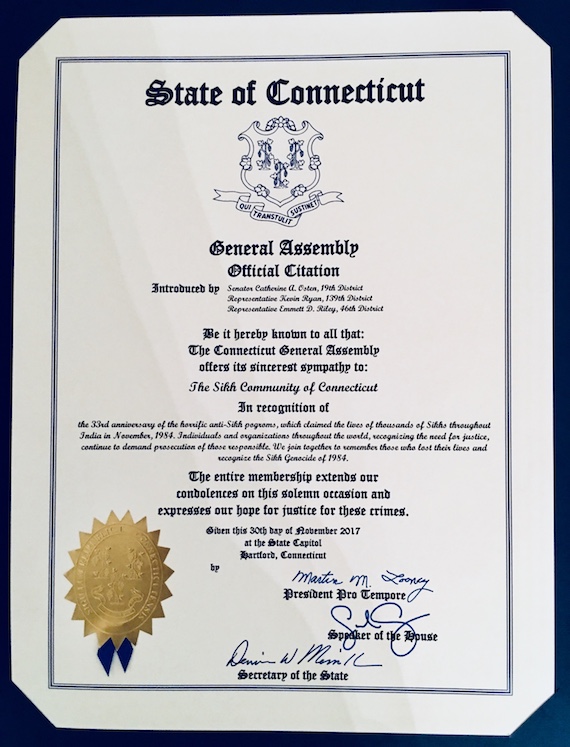 State of Connecticut (USA) recognises the fact of 1984 Sikh Genocide

Cathy Osten also said it is matter of Human Rights and their is no doubt that It was a Genocide.

Cathy Osten also offered to read the Proclamtion on Senate and House Floor in coming years so it can be documented and become part of State record.

Mayor of City of Norwich “Deb Hinchey” also Declared that anti-Sikh Violence Of 1984 as Sikh Genocide and Presented Proclamation to Sikh Community.

Many other State level leaders also came to show their respect for Sikh Community. 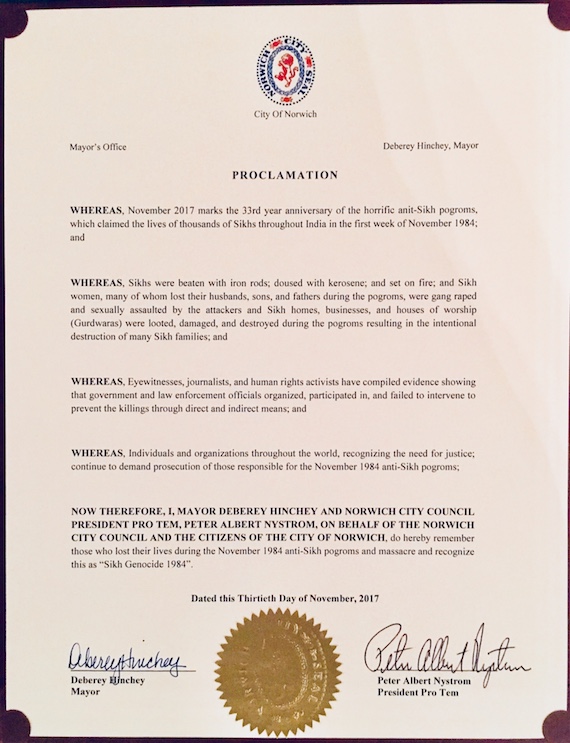 Swaranjit Singh Khalsa also read certificate from US Congressman “Joe Courtney” which recognized all the people who lost their lives from Oct 31st to Nov 4th 1984 in Congressional Record.

Former Commissioner Of Consumer Protection “Jonathan Harris” who is also exploring his run for Governor specially came and criticized the role of Indian Gov’t in Sikhs Genocide.

Bonny Hong from Rotary Club,Joel Etra,Roz Etra,Ron Bates any many other community leaders showed their solidarity with Sikh Community.

Chris Mattie who has been Prosecutor for US Attorney Office and Candidate who is exploring his run for Governor from Democratic Party spoke about His ties to Sikh Community and why it’s is important that culprits of 1984 should be punished for their crimes.

Norwich Public School Supretendent “Abbie Doliver” told everyone that she will work with Sikhs to Introduce Sikhism in School System.

Sikh Community leaders from all over Tri-State came to show their support to Swaranjit Singh Khalsa.

In this event special recognition was given to all Sikh defenders and soldiers of Khalistan Movement including Sant Jarnail Singh Khalsa Bhindrawale in form of “Jakara” and Comment was made that until a sovereign land called Free Punjab/Khalistan is created where everyone is treated equally and rights of Punjab is secured the struggle will continue by Sikh Nation.

Swaranjit Singh Khalsa also Showed Sikh Leaders from Tri-State that how they were able to achieve some tangible achievements in Norwich first by putting up “Jee Aaya Nu” sign at city entrance and by created Peace Pole Monument with says “Sarbat the Bhalla” on it.

Khalsa also encouraged everyone to visit Exhibition on Punjab and Sikhism by Otis Library Of Connecticut which was given award by White House and by Michael Obama.