Uttarakhand: Thousands of Sikh Yatris visit Gurdwara Hemkunt Sahib every Summer. As a part of tradition these carry Kesri flags on their vehicles. It is learnt that Uttarakhand police this year is preventing Sikh yatris from carrying Nissan Sahib.

In a video that has gone viral Uttarakhand police officials can be seen removing the Sikh flags from two wheelers and four wheelers of Sikh yatris. 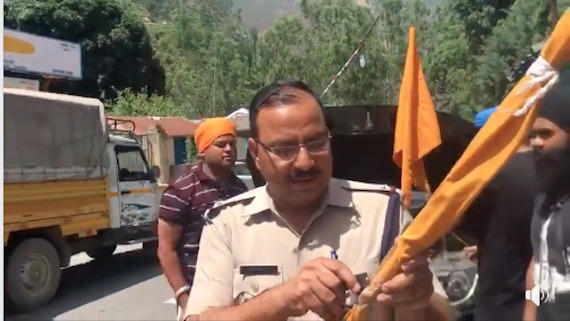 One being asked by Yatris in his regard the police official declines to offer proper reason as simply says that it’s not allowed. He failed to show any written order in this regard. Notably Uttarakhand is ruled by pro-Hindutva Bhartiya Janta Party (BJP).

Sikh yatris have resentment over the police action.