War of Words Breaks Out Between Punjab Government and SGPC

Amritsar/ Chandigarh: The Shiromani Gurdwara Prabhandak Committee (SGPC) and the Punjab Government have engaged in war of words. It all started with Punjab Chief Minister Capt. Amarinder Singh’s statement on an alleged threat issued to Sikh pracharak Bhai Ranjit Singh Dhadrianwale by a pracharak belonging to Damdami Taksal Mehta.

A written statement issued by Punjab Chief Minister’s Office on May 24 (copy available with Sikh Siyasat News) stated that Capt. Amarinder Singh issued a stern warning to the Damdami Taksal over their alleged threats to Sikh preacher Ranjit Singh Dhadrianwale, cautioning them against any attempt to take the law in their hands. 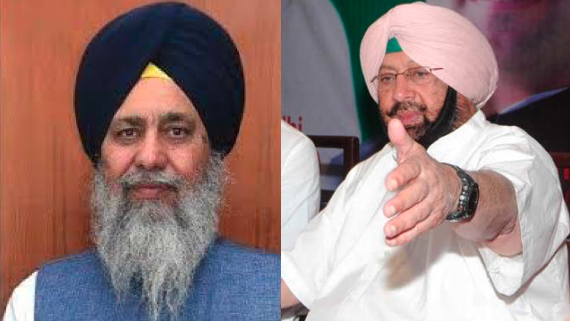 SGPC chief Gobind Singh Longowal objected to CM Amarinder Singh’s statement terming it as an interference in internal matter of the Sikhs. SGPC president in a statement on Monday (May 28) claimed that the Chief Minister should refrain from creating friction between religious preachers, Sant Samaj and Sikh organisations. He said the Damdami Taksal had been instrumental in propagating Sikhism and any statement against it would hurt the Sikh sentiments.

Punjab Cabinet Minister, Sukhjinder Singh Randhawa has responded to SGPC chief Gobind Singh Longowal’s statement. He said that the SGPC chief should “concentrate all his energies on working for the welfare of the Sikh Panth instead of being a mere tool in the hands of Badal family”.

Minister Sukhjinder Singh Randhawa went on to term Gobind Singh Longowal as ‘tankhahia’ and siad that he had “no right to order Chief Minister Captain Amarinder Singh to lay off matters concerning panth as the Chief Minister is firstly a Sikh and then a political personality”.