Was PM Modi not aware of “ISI game plan” on Kartarpur Corridor? A poser for Punjab CM (by IP Singh)

If the Punjab chief minister Captain Amarinder Singh’s latest arguments on Kartarpur corridor are correct, then is it valid to draw the conclusion that Prime Minister Narendra Modi was unaware of the Pakistan army and ISI’s game plan on the Kartarpur corridor? The line taken by the chief minister is in complete contrast to the credit claimed by Modi and his government, not once but repeatedly, for the initiative. This contrast poses serious questions for the Indian intelligence and diplomatic set up too — will someone tell us the truth?

In a recent interview Amarinder termed the corridor a “bigger conspiracy” hatched by the Pakistan army. “The opening of the Kartarpur corridor is clearly a game plan of the ISI,” he said. To buttress his hypothesis, he argued that Pakistan army chief General Qamar Javed Bajwa had broken the news to his minister Navjot Singh Sidhu even before Imran Khan was sworn in as the prime minister. He “admitted” that Pakistan was attempting to revive militancy in Punjab and everyone should be wary of all of its overtures, no matter how grand they appear to be. 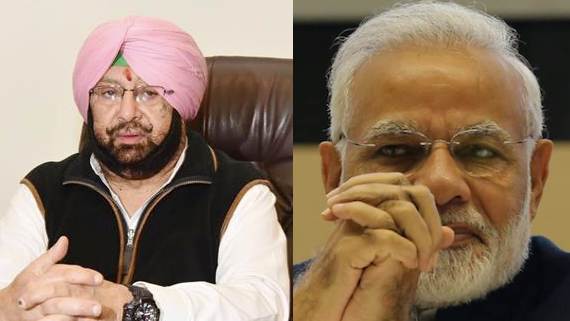 Now compare it with what Modi said a day after his cabinet on November 22 decided to build the corridor from Dera Baba Nanak to the international border. “Had anyone ever thought that the Berlin Wall would fall. May be with the blessings of Guru Nanak Devji, this Kartarpur corridor will not just remain a corridor, but act as a bridge between the peoples of the two countries,” Modi said.

Notably, it was not just a unilateral decision that left Pakistan to respond on its own. The ministry of external affairs also sent a communication to the Pakistan government, urging it to develop a corridor with suitable facilities in its territory from the international border to Kartarpur Sahib.

Union home minister Rajnath Singh informed the world about the “landmark decision” just after the cabinet meeting on his Twitter handle. BJP president Amit Shah made it a point to underline where the credit should be given. Around four hours after the cabinet decision, he tweeted, “I thank [email protected] for approving the historic Kartarpur Sahib corridor. This would greatly help pilgrims visiting Gurdwara Darbar Sahib in Kartarpur, Pakistan. Modi govt has continuously strived to enrich India’s rich religious diversity and this step further reinforces it.”

No wonder, the Union government immediately announced the function for laying the foundation, which preceded ground breaking ceremony in Pakistan by two days.

Once again on December 4, the Prime Minster underlined where the credit was due. Addressing an election rally at Hanumangarh, Rajasthan, he said: “The credit of the Kartarpur corridor goes to your vote. Correcting Congress mistakes was my destiny.” He held that Congress leaders at the time (of the Partition) had “no idea about the importance of Guru Nanak Dev” and no respect for the Sikh sentiments.

Do all these statements by the PM, Rajnath and Shah imply that they were just responding to Pakistan’s overtures? Does the Punjab chief minister want us to believe that Modi and Rajnath were not aware of this “ISI game plan”? Would the PM and home minister not have consulted country’s top intelligence officials and security experts within the government before taking a cabinet decision? Will it not be preposterous to even think that spymasters in Delhi shared the intelligence reports and assessments with the Punjab CM and not with the PM and Rajnath?

Amarinder used the argument that Gen Bajwa broke the news to Sidhu even before Imran was sworn in. But what’s new? This sequence was known to all. All the channels played this video numerous times as some TV anchors, posing as ultra-nationalists, were haranguing Sidhu.

The sequence must have been brought to the notice of the Prime Minister and the home minister and it is highly unlikely that those at the helm of internal security or intelligence set up did not broach the issue with them in over three months after that Sidhu-Bajwa hug? Notably, after taking the decision, India also urged Pakistan to reciprocate. Was it according to the ISI script?

In 2004, when Amarinder went to Pakistan, befriended his counterpart on the other side of Radcliffe Line and raised the issue of Kartarpur corridor, the Pakistan army was calling the shots there and Gen Pervez Musharraf was at the helm. What’s really different now?

Interestingly, Amarinder’s claims and arguments in the interview matched with those articulated by Seshadri Chari, former editor of RSS journal Organiser, in an article published on November 30. Chari opened his piece stating, “The dispensation in Islamabad, obsessed with terror, sponsored by none other than its all-powerful army, has acquired yet another corridor — Kartarpur — to perpetuate another round of terrorism on India, especially in the border state of Punjab. Trust Pakistan to lay a minefield and ambush New Delhi with ever-new shenanigans.”

“He (Sidhu) also said that General Bajwa expressed a desire to open the route to Nankana Sahib — a Sikh pilgrimage site in Pakistan. So, it is evident that Imran this week was only reading out the script given to him by the all-powerful army top brass,” he added.

Chari also claimed that “New Delhi had very little or rather no option but to accept the corridor proposal and play along,” thus effectively taking away the credit from the Modi government for the corridor.

“The Pakistan army very cleverly identified their man in India — a Sikh, a cricketer, friend of Imran Khan, political leader of the Congress and a former BJP member,” he argued.

Who would have thought that Chari would find support from a Congress chief minister — a Sikh, a former Indian Army captain, a friend of former Pakistan Punjab CM Parvez Elahi and former Congress MP who defeated BJP’s top gun Arun Jaitley in border district of Amritsar in 2014.

So, who should we believe, Amarinder and Seshadri Chari or Modi, Rajnath and Shah? Who will clear the air?