Washington, DC: A press release (dated: Sept. 15) by EcoSikh says over 300 Sikhs joined to support the Sikh environmental action around the world led by the US based NGO in a gala which marked the 5 year anniversary of the organization.

Organizers termed this as the ‘largest gathering of Sikhs coming together for Earth’s ecological future’. During the evening, funds were raised to help support the environmental initiatives in Punjab and elsewhere in the world which are being coordinated by EcoSikh.

Launched in 2009, EcoSikh has facilitated many projects in Punjab and around the world through its two staff members in India and one in Washington. Sikh Environment Day (March 14), a program of the organization had over 2,000 Sikh gurdwaras, educational institutions, schools and colleges joining this year. EcoSikh has also started projects in the Sikh sacred cities Amritsar and Nanded in India.

Suneet Singh Tuli, Chief Executive Officer of DataWinds Ltd., whose company created the world’s most affordable tablet computer, gave the keynote address of the event.
Tuli appealed to all guests, and asked them to take concrete actions to make a positive difference in their communities. “We cannot be quiet bystanders. We must right the wrong that we see. We are answerable to the future generations if we do not take care of Mother Earth. It is our responsibility,” said Tuli. 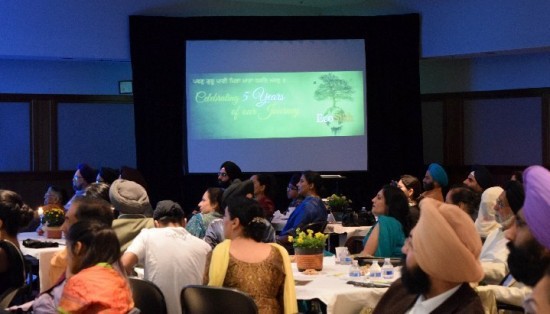 Attendees at the EcoSikh Gala Dinner

Dr. Rajwant Singh, President of EcoSikh, said, “Punjab is facing dire ecological consequences due to over use of pesticides and chemical fertilizers in the land. Punjab rivers and ground water is no longer safe for human consumption with the result all Punjabis are facing serious health challenges unless this trend is reverted with full rigor. Cancer is on the rise and radioactive toxicity is also being reported. It is critical that all Punjabis and particularly Sikhs make environment as one of the top agendas. EcoSikh’s main purpose is to highlight the Sikh teachings on environment and also to inspire people to take action.” He pointed out that forest coverage in Punjab is less than 1 percent and city of Amritsar has less than 3 percent forest cover. He appealed the community to help support the environmental awareness and tree plantation drive in Punjab.

“It’s very inspiring to see both youth and adults here tonight,” said EcoSikh North America Program Manager, Sumeet Kaur. “It is crucial to have an intergenerational audience. Our mothers and fathers care deeply about the environmental integrity of their homeland, but we must also charge Sikh youth with the responsibility to take green actions. The fact that we have many young people attending and volunteering means that young people will take control of their futures and rectify damages previous done to Mata Dharat Mahat.”

Ravneet Pal Singh, South Asia Project Manager, appealed to the audience with his speech on environmental preservation and the pointed out that often people blame developing countries for environmental degradation but it is the developed world which has caused havoc on many fronts. He added, “Birds, animals and fish in the oceans are part of the family and their well-being is equally important. We all need to leave positive carbon footprints so we leave this world livable and lovable for future generations.”

SikhNet, a renowned Sikh cybercommunity website for news, events and online discussions was honored for their work in promoting the environmental agenda through their online network. Guru Amrit Singh of SikhNet praised EcoSikh’s work and said, “Their efforts are very important for all humanity and we are happy to be part of this movement.”

The night came to an end with another performance by Devender Pal Singh, who engaged the crowd directly by dancing with guests on the dance floor. Harjot Singh accompanied him on Dhol.